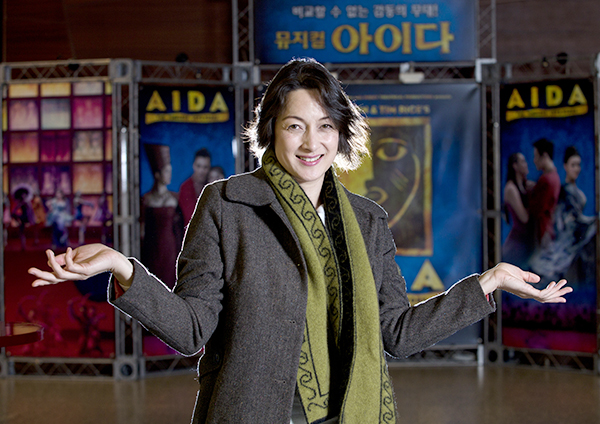 “I would have died if I had stayed in one country for a long time,” says Kolleen Park. “I wouldn’t have lived any other way.” By Park Sang-moon


Artistic director-music director-actress-dancer-professor-singer-author- business woman Kolleen Park, 45, is both a hyphen-hater’s worst nightmare and all but ubiquitous. Born to a Korean father and Lithuanian-American mother, Park traveled back and forth between the two countries since she was young, a routine that would surely give most people an identity crisis. But for Park, it was an “adventure.”

Often referred to as a guru of the country’s music industry, Park was born in Los Angeles and came to Korea at the age of 3. She returned to America when she was in fourth grade and came back to Korea again as a high school freshman, staying only a year. After graduating as a cello major in United States, it was back to Korea to pursue her master’s degree in gugak, or Korean traditional music.

“I would have died if I stayed in one country for a long time,” she says. “I wouldn’t have lived any other way.”

Park rose to stardom in Korea when she led an amateur choir on KBS’ “Qualifications of Men” in 2010 and has appeared frequently on the small screen as a music expert celebrity ever since. Most of the time, however, she’s directing musicals, writing books, teaching or conducting.

“That’s why I don’t have a business card,” says Park. “It’s very difficult to define what I do.”

This year has been a busy one for the “adventurous” Park. She was a music teacher for a day as a goodwill ambassador of Seoul City and one of the judges for MBC’s “College Music Festival” last month. Currently, she’s an associate director and music director for the Korean production of “Aida,” which kicked off its five-month run at the D-Cube Art Center in Sindorim, western Seoul, last week.

“[The whole production team] thought the enthusiasm from the audience would die down after the week-long previews we did before staging it on Dec. 2,” Park says. “But the enthusiasm seems to keep going. This is a very nice surprise for all of us.”

The Korea JoongAng Daily sat down with Park for an interview at D-Cube Art Center last week. Following are excerpts from the interview. 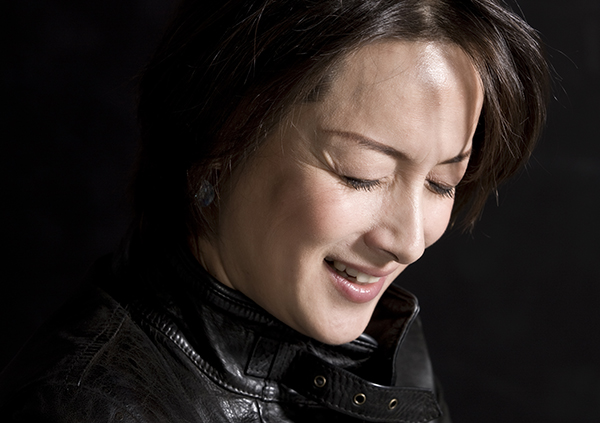 Q. First of all, why a musical? You majored in cello and studied gugak. Now you are called “the guru of the musical industry.”

A. I started piano and dancing and at a very young age. Then I did theater in elementary school, but I always sang all my life. I guess it all combines into one thing - the musical. I get bored just doing one thing. You couldn‘t get me to play Bach’s cello suite for 10 years. That would’ve killed me. There are people who can do that, and they are the people who should do that. And there are those people who should be doing this, which is what I do.

You said you’ve been going back and forth between Korea and America all your life and now you are finally based in Korea. As an “adventurer,” do you have any plans to go overseas?

Of course I just want to get up and go, but things keep me here. I mean, it’s great to have work here with all the soaring unemployment rates all over the world. I’ve been lucky to keep being asked to work here, which is great. I have schedules for next year and the year after, but I’m kind of looking for a two- or three-year break to go away somewhere and live in a different country. It doesn’t look like that’s going to happen anytime soon, though. I was thinking of going to France for two or three years. Of course, I would have to start all over again. It’s much easier to stay here, but easy isn’t fun.

You’ve worked in many musicals, including “Chicago,” “Rent,” “Aida,” “Next to Normal” and many more, as a director, performer and conductor. What’s your favorite musical?

I worked on them in different aspects. I performed in some, I directed some, I was music director for some. But to pick one, I think I liked Disney’s “The Hunchback of Notre-Dame” the most, conducting-wise. As a director or an associate director, I think I love working with “Aida” the most. But as a director on my own, I loved doing “Last Five Years” the most. So it’s different. Of course, I loved performing “Next to Normal” the best. 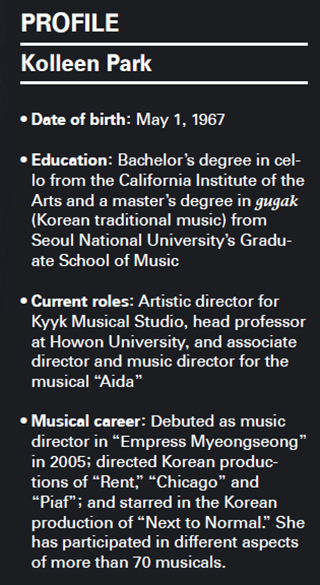 The pool is very small. A lot of people are doing musicals, but we don’t have a long enough history. It’s only been 10 or 12 years since we really started to do actual musicals in Korea. We have a few trained younger actors and actresses, but there’s no 50-year-old trained musical actor or actress.

Of course, there’s the first generation like Yoon Bok-hee and Kim Sung-nyo in the musical scene, but they come from an acting background. They were actresses who could sing. They had such a charisma that they paved the way.

Then there’s what I call the second generation - actress Choi Jeong-won and actor Nam Kyung-joo. They had a little bit of training and they survived it because they had the spirit of it.

And now we have the third generation, who kind of learned about it and studied it a little bit, but we still don’t have a long enough history where people start at such an early age, like they do in America. There’s hardly any Korean kids who learn tap dancing at the age of 2. The education system here doesn’t allow you to study what you want until you graduate from high school. So they always start very late.

Korea doesn’t have the big talent that comes innately and instinctively from having learned at an early age. So I think we still have to wait until we get those young generations who start early. It should be included in this “gifted and talented education” or something, but I don’t think Koreans view musicals as the proper arena for the “gifted and talented.” They consider it an entertainment industry, whereas it’s actually an art. So we need those younger generations who will one day be 50 or 60, then we’ll have a large pool. Now, we are not even halfway there.

Korean musicals seem to be finding success in Japan, and critics point to the casting of Hallyu stars as the reason behind its success. How do you see this phenomenon?

I think it’s the cheapest way to make money. I don’t follow that. I don’t know what would happen if someone asked me to have an idol star from a boy band or a girl group in my musical.

Well, frankly speaking, among the ones I’ve seen, I think only two might survive in this industry. One has survived and she’s Ock Joo-hyun. The other one might be Ivy, if she keeps studying. I’ve seen other boys from boy bands on musical stages, but I don’t like going to see their shows because I’ve seen a few and they were awful. Audiences who go to their shows go not for the musical aspects of it, but just to see their idol star. So it kind of ruins the experience of the other audiences.

I’m not saying I don’t want them to succeed… but in order to do so they have to study properly. We also need to educate the audience as to what musical theater is so people don’t bother others who are trying to enjoy the experience. Otherwise, they can just have a K-pop concert and the fans can go to that. Singers who perform on a musical stage should delete themselves as singers, unless they are really desperate for money. Again, it’s ironic but it’s the cheapest way to earn money. So if some production teams want that, it’s fine with me. If we [who want to succeed without casting an idol] are strong enough, we’ll be able to filter or infiltrate their world with our good show. I don’t see it as bad or good. I just wish it was done in a slightly different way, so that it would be win-win for both of us.

You also participate in the process of translating licensed musicals into Korean. I guess it’s not typical for an artistic director to be as heavily involved in translation as you.

Most times, the translations come to us. Translators know the translations will always change because they didn’t see the set, what’s really needed for the show. And sometimes the lyrics are translated literally and you need to craft them to be more poetic. There are a lot of changes in lyrics and dialogues once they get into our hands after the initial translator does his or her job.

As for “Aida,” the team already had it all set up and I came in as a music director. As a music director, you have to work on lyrics after they are all translated, because some of them just don’t fit. Every year, we work on them again and again. So this time, the lyrics and dialogues have all been upgraded by me and my assistant director.

You have so many titles. You are a professor, an artistic director, a music director, a conductor, an author and many more. But out of all those titles, what do you feel most attached to?

I don’t want to be defined by one thing. I just do whatever I want at that moment. And all the things I’ve done actually come down to one thing: performing arts. That’s what I do, and within that I work in many areas.

I not the kind of person who has a defined image of exactly what I want to be and works toward it. I am very free and I like change. I don’t live to leave a legacy.