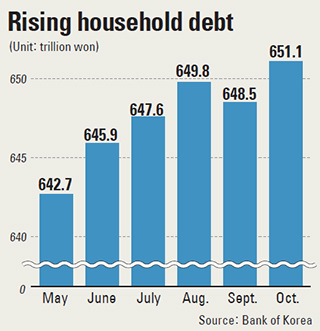 Household loans extended by Korean institutions grew by the most in four months in October as the government’s steps to boost the slumping property market helped raise housing transactions, the central bank said yesterday.

Household lending handled by local banks and non-bank institutions totaled a record 651.1 trillion won ($604.3 billion) as of the end of October, up 2.6 trillion won from the previous month, according to the Bank of Korea.

The monthly growth marked the largest gain since a 3.1 trillion won on-month advance in June.

The BOK said that household loans picked up in October, affected by the government’s measures to boost the sagging property market, including tax cuts, which were unveiled in September.

Korea’s property market is in the doldrums as the local economy loses ground and more households are delaying buying homes on prospects housing prices will fall further.

Banks’ household loans, including home-backed lending, grew by 2 trillion won on-month to 461.3 trillion won as of end-October, a turnaround from a 800 billion won fall in September, it added.

The data came two days before BOK policy makers are to hold their monthly rate-setting session. Analysts said that the BOK is likely to freeze the key rate at 2.75 percent for the second straight month in December after cutting it in July and October.