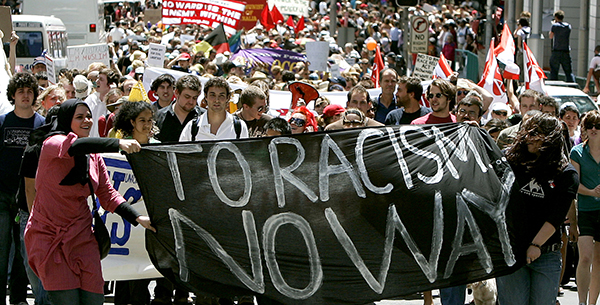 It is not correct that these procedures are little used. Over 500 complaints of racial discrimination were finalized by the Commission last year. We know racism exists in all societies, including Australia, and legislation alone cannot prevent it, which is why the Australian government committed to a National Anti-Racism Strategy, which was launched in August this year.

Preliminary indications are that these unfortunate attacks are linked to opportunistic robberies. Unfortunately, it can make a difference where you are and when. But this is not an excuse. As Foreign Minister Carr said, Australian authorities are vigorous in pursuing perpetrators of violent crime, regardless of its cause.

And Australian law allows for harsher penalties if racism was found to be a factor. Each of the attacks is being investigated by police and a number of suspects have been charged. Foreign Minister Carr said that Australian officials in Australia and Seoul were working closely with Korean authorities to address the issue, including ensuring all Korean visitors have access to useful safety information already provided to Korean students.

Australia is a welcoming country. One in four Australians were born overseas. Almost half of all Australians have at least one parent born overseas. Twelve percent of Australia’s population is originally from East, Southeast, South or North Asia. Currently the biggest source country of migrants for Australia’s large annual migration program is India, with around 30,000 migrants in 2011-12.

As Australia’s Foreign Minister, Senator Carr said last month, Australia is proud to be a multicultural society. Senator Carr noted that his wife, Mrs. Carr, who forged a successful career in Australia, was born in Malaysia of Indian and Chinese parents. For Korea, we have seen a more than 90 percent increase in the number of Korean-born Australians since 2001. Around 4,000 Koreans each year have been granted a permanent visa to settle in Australia.

Korea has also been our third-largest source of international student enrollments for a number of years and our second-largest source of working holiday makers - with over 30,000 young Koreans gaining valuable work skills in Australia each year. With continuous positive economic growth over the past 21 years and a GDP per capita ranked sixth in the world in 2011 and almost full employment, Australia is seen as a land of opportunity for many.

I would like to assure Korean parents who are considering sending their children overseas to study that Australia remains a safe destination. According to a recent survey, Australia is one of the top five countries among OECD member countries for safety based on murder and assault rates. Australia ranks seventh out of 36 nations in the OECD, based on the percentage of people who report having been assaulted in 2011.

These statistics tell us that while Australia is a safe country, crime regrettably does happen. But we should not accept suggestions that those of foreign origin are targeted for crime in Australia. There is no evidence for that. Indeed, in August 2011, the Australian Institute of Criminology released its report - “Crimes Against International Students in Australia Report 2005-2009” - after comprehensive examination of police statistics. It found that international students are less likely, or as likely, to be victims of physical assault or other theft as the wider population in Australia.

To conclude, I would like to repeat that the Australian government is very concerned about the unfortunate attacks on Korean visitors to Australia. But let us not forget our long history of friendship. And rest assured that the vast majority of Koreans find their time in Australia very rewarding.

* The author is Australian ambassador to Seoul.