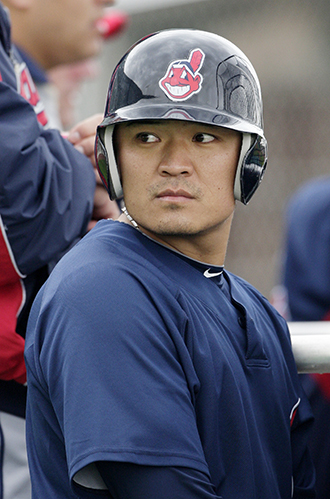 Choo Shin-soo has found a new home along with new hope for realizing his dream of a World Series title.

The Cleveland Indians traded the Korean slugger to the Cincinnati Reds, both teams announced on their Web sites yesterday, Korea Standard Time.

Choo, 30, will become a free agent after next season. The deal ended his seven-year career with the Indians, who have not made it to the postseason since 2008. Cleveland acquired Choo from the Seattle Mariners in June 2006, and he has been a regular since 2008.

During a visit to Korea in October, Choo declined to comment on trade rumors, but said he wanted to play for a winning team. No Korean position player has ever appeared in the postseason.

The Indians said the team “made repeated attempts at negotiating a long-term contract” with Choo, whose steady performance brought him a nomination for the Hank Aaron Award given to the top hitter in each league.

“I expressed my profound appreciation not only for his ability as a player, but for the person he is and the teammate he was,” Indians general manager Chris Antonetti said on the team’s Web site.

Choo, who has been Cleveland’s primary right fielder for the past six years, will play center and bat leadoff for Cincinnati. Reds General Manager Walt Jocketty entered the off-season determined to improve production from the top spot in the batting order, which last year contributed a .208 batting average and .254 on-base percentage.

Choo hit .310 with a .389 on-base percentage last year from the leadoff spot, which he occupied since May.

“He fills the one big void that we had,” Jocketty told MLB.com. “And that was a leadoff hitter and someone with the ability to get on base from the top of the order. It’s an area of our club that has been lacking.”

Choo is the third Korean to play for the Reds. Bong Jung-keun and Kim Sun-woo, both pitchers, had brief stints with the team in 2004 and 2006, respectively.

Choo’s move to the Reds sets up the possibility of a matchup between Koreans that has not occurred in Major League Baseball for several years.

The Reds and the Los Angeles Dodgers play seven times next season, and Choo at some point will likely face pitcher Ryu Hyun-jin, who signed with the California team on Monday. Both Koreans are clients of agent Scott Boras.

The two teams will play each other for the first time in a four-game series starting July 26 at Dodger Stadium in Los Angeles. That will be followed by three games at Great American Ball Park in Cincinnati Sept. 7-9.

In addition, the Reds and Dodgers play three times during the pre-season.