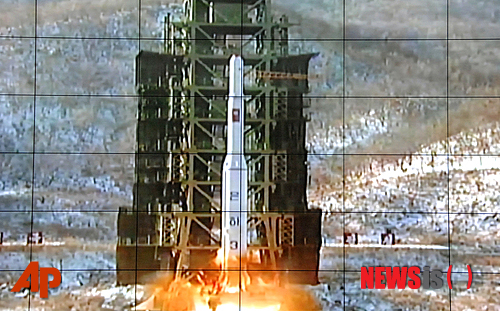 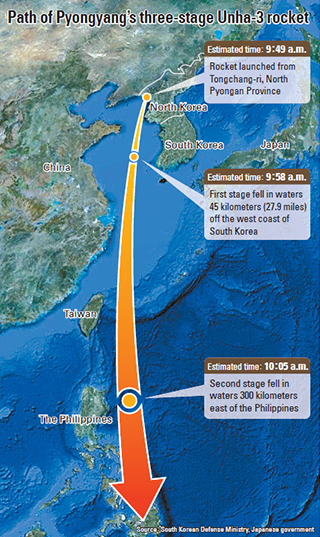 Following two previous failed attempts to launch a similar rocket, nuclear-weapon-capable North Korea has proven it has the technology to deliver a payload 13,000 kilometers (8,075 miles) away, or any part of U.S. territory, according to a South Korean military source.

The North’s official Korean Central News Agency reported that “the launch of the second version of satellite Kwangmyongsong-3 was successful through the carrier rocket Unha-3 at the Space Center in Cholsan County, North Pyongan Province.”

The outside world believes North Korea’s intention is to test an intercontinental ballistic missile, although it said it wanted to put a communications
satellite into orbit. KCNA said, “The satellite has been put into orbit.” Outside analysts were still waiting to confirm if a satellite was successfully orbiting the earth.

South Korea’s Ministry of National Defense spokesman Kim Min-seok said at a briefing yesterday that the three-stage Unha-3 rocket blasted off at 9:49 a.m. from a launchpad in Tongchang-ri, Cholsan County, in the northwestern part of the country. About 90 seconds later, the South’s Aegis-equipped warship King
Sejong deployed in the Yellow Sea detected the rocket.

The South Korean military confirmed that all three stages of the rocket separated without technical problems.

The first stage was confirmed to separate at 9:52 a.m. and dropped into waters 45 kilometers off the west coast of South Korea, according to the ministry.

The payload’s fairing, a kind of cover for the tip of the rocket, separated and splashed into waters off Jeju Island.

The rocket dropped off the South Korean Air Force’s radar after it passed over the west coast of Okinawa, Japan’s southernmost island, Kim said.


The Southern military said the second stage appeared to fall into waters near the Philippines, 2,600 kilometers from the launch site. 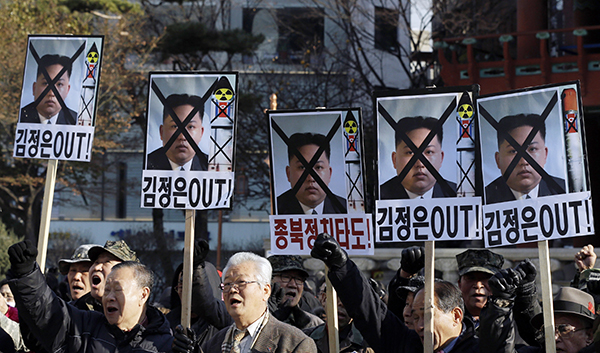 The North American Aerospace Defense Command, an around-the-clock surveillance system of the United States and Canada, confirmed that the launch appeared to
be successful.

“U.S. missile warning systems detected and tracked the launch of a North Korean missile at 7:49 p.m. EST,” the statement read. “The missile deployed an object that appeared to achieve orbit.

“At no time was the missile or the resultant debris a threat to North America,” it added.
South Korea’s Kim said the military hadn’t definitively concluded the launch was successful.

“Although the rocket put an object into orbit, we need to know whether it is working or not,” Kim said at the briefing.

The National Intelligence Service concluded yesterday that the firing of the long-range rocket was intended to test intercontinental ballistic missile
technology.

In an urgent briefing with the National Assembly’s Intelligence Committee, the NIS told lawmakers the rocket was carrying a payload of about 100 kilograms (220 pounds), calling into question Pyongyang’s claim that it put a satellite into the orbit.

“The payload was about 100 kilograms,” a senior NIS official was quoted as telling the lawmakers. “A satellite should weigh at least 500 kilograms. So we can conclude that it wasn’t a satellite.”

The NIS acknowledged the North’s superior technology in long and midrange missiles, but stressed that the South has stronger short-range capabilities.

South Korea’s Minister of Foreign Affairs and Trade Kim Sung-hwan denounced the launch as a threat to the Korean Peninsula and the international community.

“The firing of the missile by the North is in clear violation of UN Security resolutions 1718 and 1874, which prohibit any launch using ballistic missile technology,” Kim said in an official statement yesterday. “It poses a challenge and threat to peace and security on the Korean Peninsula and around the
world.

“Together with the international community, the government of the Republic of Korea strongly condemns North Korea for defying repeated international warnings against the launch and for going ahead with the provocation,” he said.

Two previous attempts to test the same kind of missile failed, one in April 2009 and the last in April. In April, the entire rocket exploded within two minutes of liftoff and without any stages separating. The range of that rocket was estimated at 10,000 kilometers, which could reach the West Coast of the United States.

The North said the rocket was 30 meters (98 feet) long, had a 2.5-meter diameter and weighed 92 tons. South Korean military experts yesterday estimated the new rocket had a 13,000-kilometer range.

The public was taken unaware because on Sunday Pyongyang said it would widen the window for the launch to Dec. 29 because of a “technical glitch” in the first stage of the rocket. A high-ranking South Korean government official told the JoongAng Ilbo Tuesday that the rocket was being dismantled. It appears that the information came from the Japanese government, which still maintained yesterday the rocket was dismantled Tuesday.

“We confirmed that the North removed the rocket from the launchpad,” Satosi Morimoto, Japan’s defense minister, said at a press meeting yesterday. “However, we haven’t confirmed whether the North repaired it or replaced something with a new one.”

South Korea’s military and intelligence agency said they had no illusion that the rocket was dismantled.

Minister of National Defense Kim Kwan-jin said at a parliamentary questioning yesterday that the government was ready for a launch. “We already confirmed that the missile was on the launchpad yesterday afternoon and reported it to the Blue House,” Kim told lawmakers. “President Lee Myung-bak also was aware of it.”

Yun Duk-min, a professor at the state-run Institute for Foreign Affairs and National Security, told the Korea JoongAng Daily that the North appeared to have successfully taken South Korea, the U.S. and Japan by surprise. “It was a good opportunity for the North to test the capability of their surveillance,” Yun said. “The North will probably conduct a third nuclear test no later than May 2013 because a nuclear test should be conducted at least every three years for accumulating data in general.”

Worries are mounting in South Korea that the North’s rocket technology is so superior. The South is still struggling to successfully launch a two-stage rocket, the Naro-1.

“I think the rocket technology of South Korea is lagging behind the North’s by more than 10 years,” said Kwon Se-jin, a professor at the Korea Advanced Institute of Science and Technology’s Aerospace Engineering Department. “The North Korean rocket is made from their own technologies, while we are still depending on Russia’s technology, and their three-stage rocket is more effective than the South’s two-stage one.”

Kim Yeon-su, a professor at Korea National Defense University, said Kim Jong-un will rally support from his people in the aftermath of the successful launch.