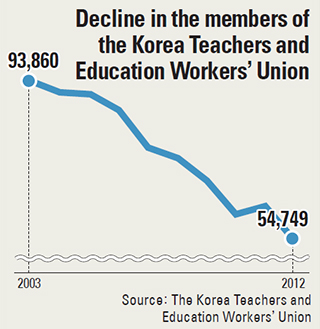 The Korea Teachers and Education Workers’ Union elected its new hardline leader, Kim Jung-hoon, who is pushing for a dramatic departure from education policies implemented by the Lee Myung-bak administration, on Friday.

Kim, 48, will lead the left-leaning teachers’ organization for the next two years, raising concerns over how the bullish head will manage one of the nation’s two major educators’ groups.

During his campaign, Kim said his moderate predecessors “had not fought [with the government] when it was necessary” and a union group that “only negotiates at the table without a fierce fight will gain nothing.”

“I will make sure to clarify the direction our union should be taking in order to eradicate problems stemming from the excessive education-craze in the country,” Kim said in a statement released after his victory. 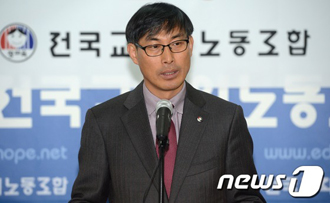 Kim campaigned strongly against education policies that he believes encourage already-fierce competition among students for college admissions and grading school teachers on their teaching performances.

Kim especially made clear his opposition to the standard scholastic aptitude test, introduced at the onset of the Lee administration in 2008, which takes place nationwide on a predetermined date to assess all students’ academic abilities, claiming it drives students toward more competition for better academic performance.

Kim is also calling for an extension of high school standardization and elimination of special-purpose high schools.

Kim’s victory has drawn both attention and concern.

Citizens in Seoul are set to choose a new education chief on Dec. 19, the same date for the presidential election, to take the seat left by former Seoul education superintendent Kwak No-hyun, who is now serving a one-year prison term on charges of bribing his rival candidate with 200 million won ($186,046) to quit the race for the top post at the Seoul Metropolitan Office of Education in 2010.

The liberal union was founded in 1989 when the country was emerging from its over two-decade-long military ruling.

During the first few years since its launch, over 1,500 teachers were dismissed from schools for their membership in the liberal teachers’ union. They were later reinstated.

It took 10 years for the liberal teachers’ group to be formally recognized by the government as a lawful union group under the Kim Dae-jung government in 1999.

The group, however, has seen its number of teachers decline in recent years as it has come under fire.

Critics criticize the union has become too politically focused and biased rather than addressing educational issues.

The union group’s opposition to the Korea-U.S. free trade agreement in 2006 was a case in point.

The number of teachers at the group, who donate 0.8 percent of their salaries to the union, has steadily decreased in the past 10 years.