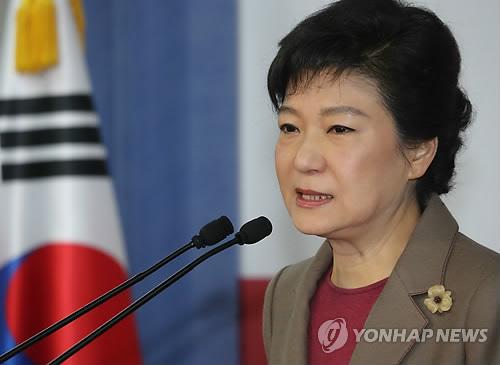 South Korea's ruling party presidential candidate Park Geun-hye blasted the opposition camp Friday for accusing her of cheating and meddling in the race, saying the claims amounted to nothing but false propaganda.

"From this moment, I am declaring an all-out war on false propaganda," the 60-year-old contender of the Saenuri Party told a news conference at party headquarters. "I will firmly crush the dark political maneuvering and false slander so that they may never reappear on this land."

Park's remarks come five days before the election that is turning into an increasingly tight race between the conservative candidate and her liberal rival Moon Jae-in of the main opposition Democratic United Party (DUP).

Earlier this week, the DUP accused Park of trying to cheat during a televised presidential debate by carrying a tablet PC into the TV studio. The party has also demanded an investigation into allegations the country's main spy agency posted slanderous comments about Moon on the Internet in a bid to influence the race.

"(They) are accusing me of cheating during the debate by claiming that the bag I have carried for 10 years and used to carry reference material for the debate was (carrying) an iPad," Park said. "I would like to ask if that is even possible during a live broadcast."

On Tuesday, the DUP sent a group of officials from the party, the police and the National Election Commission (NEC) to a small apartment in southern Seoul, which they claimed was being used by an official of the National Intelligence Service (NIS) to post negative comments about Moon online.

Media broadcasts showed the officials and journalists crowding the corridor outside the apartment as the agent refused to let them in and the officials demanded to check her computer.

The agent, surnamed Kim, has denied the allegations and submitted her computer to the police.

"The police must swiftly complete their investigation and reveal the truth as quickly and clearly as possible," Park said. "The DUP should submit evidence backing their claims to the police today. If not, I cannot but think that the DUP is acknowledging it was clearly false propaganda."

The conservative candidate also defended herself against allegations she had a shaman conduct a 150 million won (US$139,700) ritual to help her resolve criticism surrounding a scholarship foundation established by her late father and authoritarian president, Park Chung-hee.

Photos of the alleged ritual have spread online after a popular political satire podcast broadcast the allegations that were first raised by a Buddhist monk.

"(They) are attacking me by saying I conducted a ritual by manipulating photos of my attendance at an official event marking my late mother's birthday," Park said.

She also demanded Moon take responsibility for the accusations if they turn out to be untrue.

Shortly after the news conference, the DUP fired back by holding its own press conference at party headquarters.

Chung Sye-kyun, a ranking official within Moon's election camp, argued Park was trying to cover up the allegations surrounding the spy agency.

"Above all, (Park) should apologize to the people for the incident and take responsibility," he said, claiming the intelligence agent was confirmed to have been conducting the alleged anti-Moon campaign at NIS orders.

The party official, moreover, said that the Saenuri contender needed to acknowledge that one of her campaigners was caught red- handed by the NEC for engaging in illegal election activities and operating a non-registered office. The election watchdog said earlier in the day they will file charges against the Saenuri official.

Saenuri said the person who operated the office was a non-paid member of Park's social networking service support (SNS) team, and argued any actions he may have been involved in were never cleared with the party.