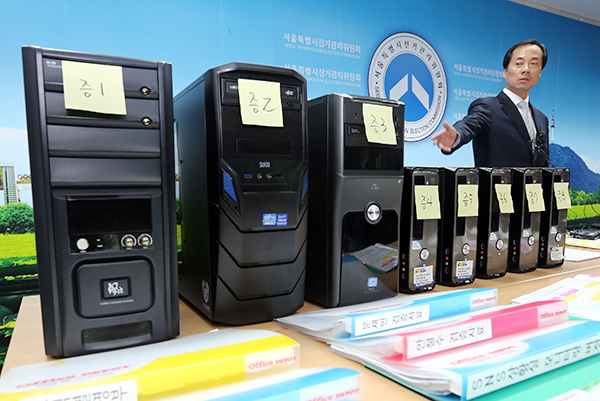 The Seoul Metropolitan Election Commission held a briefing yesterday and announced its preliminary probe outcome into the suspect and his team’s operation in the unauthorized office.

“We raided the office on Thursday, rounded up eight suspects and conducted an investigation overnight,” said Sohn Gwang-yun, an official of the city’s election watchdog.

“We confirmed some violations of the election law. We decided to bring the case to the Seoul Southern District Prosecutors’ Office today to press charges.”

After receiving tips that an authorized office of the Saenuri Party was in operation in an officetel building in Yeouido, western Seoul, the election commission sent 10 staffers to raid the place around 6 p.m. on Thursday.

A sign reading “President war room” in English was hung on the wall inside the office, commission officials said. The commission also confiscated computers and documents from the office.

Eight people were taken to the commission for questioning, including a man only identified as Yun.

Business cards seized from the office showed that he was the social network service media chief of Park’s campaign.

An appointment certificate from the Park campaign was also found.

Any violation can be punished with up to a three-year jail term or less than 6 million won ($5,582) fine.

According to Sohn, Yun and seven of his staffers worked on the SNS campaign since late September.

“We also secured evidence by capturing their postings from the Internet sites,” Sohn said.

Yun is a head of an SNS company and he has worked as a consultant for the ruling party for some time.

The commission said he hired the seven staffers to work in the office to post messages that are favorable to Park, but critical to her rival Moon Jae-in of the Democratic United Party.

Yun didn’t pay the staffers’ salary yet, but the preliminary probe showed that he promised to pay up to 2 million won for each worker after the election.

The Saenuri Party yesterday denied that it was involved in the systemic illegal campaigning for its candidate.

Representative Lee Sang-il, spokesman for the Park campaign, admitted that Yun was the SNS media chief of the party, but he is just a volunteer, not a paid member of the party.

“That place is Yun’s private office and the party has nothing to do with it,” Lee said after the Thursday’s raid. “The election commission must lay bare the truth about this scandal.”

The election commission, however, confirmed that the Park campaign paid the rent for the office.

The DUP fiercely criticized the ruling party and Park. “The Moon campaign sees this as a grave crime that infringes upon the fairness of the election,” said Park Gwang-on, spokesman of the DUP.