In first year, taming the army was Kim’s goal

In first year, taming the army was Kim’s goal 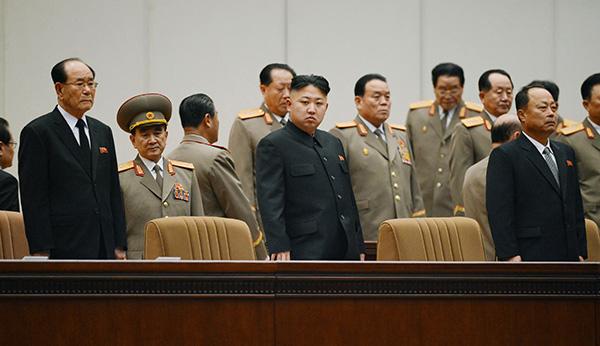 North Korean leader Kim Jong-un, center, and his top brass attend a memorial service on the eve of the first anniversary of Kim Jong-il’s death in Pyongyang yesterday. Kim Yong-nam, president of the Presidium of North Korea’s Parliament, stands at the far left.[AP/YONHAP]


North Korea marked the first anniversary of the death of its leader Kim Jong-il yesterday with a ceremony attended by his youngest son and successor Kim Jong-un, who did not make a speech.

The ceremony, attended by high-ranking party and military officials in a Pyongyang sports center, was held a day before the one-year anniversary, which is today. Kim died of a heart attack on a train outside Pyongyang.

“The great comrade Kim Jong-il has developed the army of the Democratic People’s Republic of Korea [DPRK] into a revolutionary strong military .?.?. and also built the nation into a strong country with its military power and nuclear arms,” said Kim Yong-nam, president of the Presidium of the DPRK Supreme People’s Assembly, in a message.

“The ideology and leadership of comrade Kim Jong-un is that of comrade Kim Jong-il,” he continued. “All party members, military soldiers and citizens should support him up with pure conscience and moral loyalty, safeguard him strongly, and cooperate with each other again and again.”

After the sudden death of Kim, it was unclear whether his untested, 20-something son would have a smooth succession. But a year after the third dynastic succession, he has avoided a military coup and civilian unrest.

Analysts say Kim Jong-un has put his stamp on the military with a significant reshuffle and also shifted some power from the military to the ruling Workers’ Party, a departure from his father’s adamant “military first” policy, which favored the military in almost every way.

Kim’s most visible achievement in the past year was replacing a string of high-ranking military officials.

At the funeral of Kim Jong-il last December, there were eight people who walked beside the hearse carrying the casket. On one side of the hearse were Kim Jong-un and three party officials: Jang Song-thaek, his powerful uncle; Kim Ki-nam, the ruling party’s secretary and director of the Propaganda and Agitation Department of the party; and Choe Thae-bok, chairman of the DPRK Supreme People’s Assembly. On the other side were four senior military officials: Ri Yong-ho, chief of the general staff of the army; Kim Yong-chun, defense minister; Kim Jong-gak, first deputy director of the politburo of the army; and U Tong-chuk, first vice minister of state security.

At the time, speculation was high that those seven would become the inner circle of the new leader. In fact, all four of the military officials were replaced with new faces. Three were dismissed and one has disappeared.

The most unexpected fall was that of Ri Yong-ho. North Korea announced in July that Ri was dismissed because of some “personal reasons.” Ri reportedly played a crucial role in helping the young leader get control over the military before he was inaugurated. Ri was known as a the “military tutor” for Kim, especially in the field of artillery. Unconfirmed rumors spread that Ri was purged for being “anti-regime.”

“There have been some allegations that Ri was involved in a drug scandal,” said Lee Yun-keol, a North Korean defector who is in touch with high-ranking officials in Pyongyang. “It wasn’t that big of a fault, but Kim Jong-un allegedly wanted to give warnings to some high-ranking military officials by dismissing Ri.”

Defense Minister Kim and the Vice Minister of State Security U also appeared to step down in April, intelligence sources in the South told local reporters. U has disappeared from view since April.

Kim Jong-gak, who worked for the General Political Bureau of the army and was also a rising military star, was promoted to defense minister in April, according to the North’s state media. But he was dismissed from the post in October. He was replaced by Kim Kyok-sik, former commander of the 4th Army Corps of the Korean People’s Army, who was believed to have led the deadly attack on Yeonpyeong Island and the South Korean warship Cheonan in 2010.

This military reshuffle appears to have consolidated the power of young leader. Kim said in a speech at Pyongyang’s Kim Il Sung Military University on Oct. 29 that he doesn’t need “people who are not loyal to the party and the leader, no matter how qualified they are as military men.”

Power shift to the ruling party

However, all three party officials have maintained their posts. Kim’s uncle Jang was even appointed chairman of the State Physical Culture and Sports Guidance Commission on Nov. 4. The committee is part of a new effort to “develop the nation into a top country in the athletic sector and boost public sports activities.”

“As a dictator, Kim had to decide which side he would depend on most,” Park Hyeong-jung, a senior research fellow at the state-run Korea Institute for National Unification, said. “And he apparently chose to reshuffle North Korean politics by shifting power from the military to the ruling party.”

Yang Moo-jin, a professor at University of North Korean Studies, said, “Kim restored the power and the role of the ruling party, which had been crippled because of the strong military, and also appointed his confidantes to all of the positions in the military, the party and the cabinet.”

Analysts say that Kim’s innermost circle consists of three people: his uncle Jang, his wife Kim Kyong-hui and Choe Ryong-hae, director of the General Political Bureau of the army.

Choe, who used to be a secretary of the ruling Workers’ Party, is the first civilian to have taken that post. The General Political Bureau is not involved in military operations. It keeps tabs on all military officials and cracks down on any dissent.

After the successful launch of the long-range Unha-3 rocket last week, the stars of three party officials who are known to be rocket experts - they are called the Rocket Trio - are rising: Pak To-chun, a party secretary in charge of the war industry; Ju Kyu-chang, director at the party’s machinery industry department; and Paek Se-bong, chairman of the party’s Second Economic Commission.

Ju, who graduated from the elite Kim Chaek University of Technology, was the first deputy director of the party’s war industry department since 2001. Ju was in charge of directing the facility where the North unsuccessfully tested a long-range rocket in 2009. Ju is also one of the individuals sanctioned by the UN Security Council.

Paek is not well known. He was a member of the Second Economic Commission until he was promoted to chairman in 2003. The commission is in charge of developing nuclear weapons and missiles.

Cracking down on dissidents

Although Kim Jong-un has impressed analysts with his political control in the first year, he still faces the possibility of social unrest.

In fact, he has recently started to concentrate on public security. The Ministry of Unification in Seoul said in a report submitted to the National Assembly on Dec. 6 that Kim is “obviously showing concern about public security.”

According to the ministry, Kim visited his own Ministry of State Security in October and reportedly told officials to “flatten all dissidents, who are dreaming different dreams, mercilessly and without hesitation.”

On Nov. 23, Kim convened the first nationwide meeting of the country’s police officers in 13 years. Kim instructed them to crack down on “all of those people who are hiding a knife behind their backs and waiting for the right time for an agitation or a riot.”

“Tensions appear to be running high between the regime and the society,” Chang Yong-seok, a senior researcher at Seoul National University’s Institute for Peace and Unification Studies, said. “Kim’s emphasis on public security shows how much anti-regime tensions there are in the society.”

Kim intensified vigilance against anti-regime individuals after three North Korean soldiers abruptly defected to the South this year. In August, a North Korean soldier defected by crossing a western frontline, followed by another who came across the eastern front on Oct. 2. Four days later, a soldier shot dead two superiors and came across the border near the Kaesong Industrial Complex. All three are in their late teens or 20s, the military said.

Analysts speculate that Hyon Yong-chol, the incumbent chief of the general staff of the army, was demoted from vice marshal because of those highly embarrassing defections.

While Kim Jong-un focused on controlling the military and public security, he was ambiguous on the economic reform front.

Sources said Kim tried to adopt a so-called “June 28 policy,” named after the day when they launched it, but ended up shelving it.

Under the new policy, subtitled “How to establish our own new economic system,” the nation would take 70 percent of a targeted outputs in all economic sectors and the people could take the balance as an incentive to productivity.

“They attempted the policy as sort of a pilot program in July, but there’s no evident result from it,” a Unification Ministry official told the Korea JoongAng Daily. “The North has never implemented the policy and eventually shelved it. Overall, the ‘new’ North Korea under Kim Jong-un’s leadership is a disappointment to us.”

Shin Beom-chul, director of North Korean Military Studies at the Korea Institute for Defense Analyses, said, “The policy is just a partial measure to improve the economy. Even if they do economic reform, it will be within communist boundaries. They’ll just keep earning foreign currencies through economic zones or selling natural resources.”

Cho Myung-chul, the first defector elected a lawmaker in the South, said from the people’s point of view, there has been little change in economic policy.

“For ordinary people in the North, there’s little change since Kim took over,” he said. “North Korea still doesn’t give up its nuclear weapons or missiles. It doesn’t improve inter-Korean relations and it keeps refusing the international community’s aid.

“Although Kim is building an amusement park, a horse race track and a public bath house,” he said, “they are just propaganda projects for his own image, not policies for the public.”