The action is fast in New Orleans crime thriller

The action is fast in New Orleans crime thriller 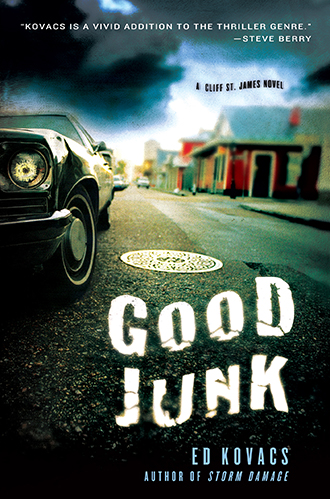 Despite his misgivings, St. James joins forces with the New Orleans Police Department after a double homicide on a seedy street leads him to a far-flung conspiracy of arms merchants. Known simply as “The Buyers Club,” this crowd is a malignant mix of foreign intelligence agents, nefarious well-heeled locals, and maybe even federal government spooks and insiders.

St. James, an ex-cop with a deep dislike for the police chief, agrees to join the NOPD investigation for two reasons: the woman of his romantic desires, Detective Honey Baybee, needs his skills to unravel the murder case and he needs the distraction as he tries to recover emotionally from the death of a young mixed-martial-arts fighter he was training.

There’s a lot to distract him. The hunt for killers, crooks and high-tech weapons dealers takes him to sites all across the flood-scarred neighborhoods of New Orleans a year after the hurricane struck and levees failed.

Kovacs, a widely traveled man of many enthusiasms, spent more than two years in New Orleans after Katrina and knows the territory.

One of the pleasures of “Good Junk” is following St. James into the many dives and diners of the Big Easy that tourists rarely enter.

Some of these are outside the French Quarter. But even in the Quarter, the private detective makes his office in a dark bar, Pravda, a kind of goth-Russian vodka and absinthe joint with a limited clientele, even among locals. (New owners in 2012 renamed it Perestroika at Pravda.) The action in “Good Junk” is fast and filled with multiple puzzles.