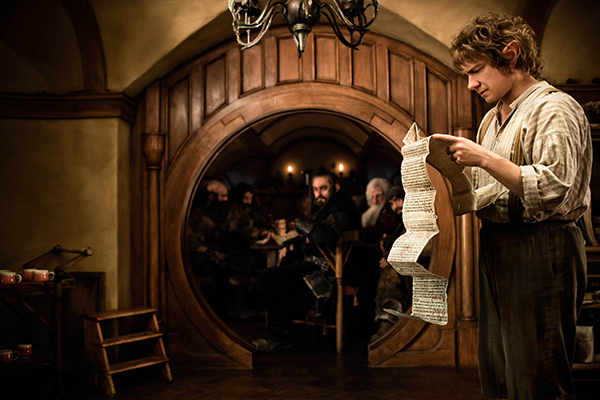 LOS ANGELES - “The Hobbit: An Unexpected Journey,” a prequel to the blockbuster “Lord of the Rings” series, earned a massive $84.8 million - one of the biggest debuts of the year, industry trackers said Sunday.

Internationally, the film earned $138.2 million, for a worldwide estimated total of $223 million, including a record-breaking $15.1 million from IMAX theaters worldwide, according to New Line Cinema, which said it was the biggest opening for any “Lord of the Rings” film.

The film stars Martin Freeman of British TV’s “Sherlock” fame and Ian McKellen, reprising his role as Gandalf the Grey, and was directed by Peter Jackson based on the classic books by J.R.R. Tolkien.

In second place was “Rise of the Guardians,” a Dreamworks holiday confection featuring Jack Frost, the Tooth Fairy, the Sandman and a tattooed Russian Santa Claus, among other unlikely characters. Industry tracker Exhibitor Relations said it earned $7.4 million.

Third place went to “Lincoln” - starring Daniel Day-Lewis as the 16th U.S. president, which earned $7.2 million. The film got a bump after earning seven Golden Globe nominations last week, the most of any film.

“Skyfall,” last week’s top film, and the 23rd episode of the spy thriller series, was fourth with $7 million.

The fifth place spot was claimed by “Life of Pi,” a 3-D fantasy by Oscar-winning director Ang Lee based on a Booker Prize-winning novel about an Indian boy adrift on a lifeboat with a Bengal tiger in the Pacific. It earned $5.4 million.

“Wreck-It Ralph,” the animated Disney film about a video game villain aspiring to be a hero, kept the seventh spot, earning $3.27 million.