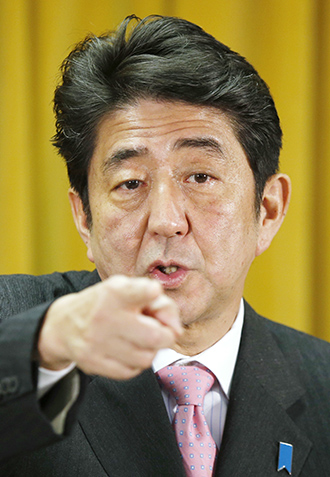 With Japan’s conservative Liberal Democratic Party (LDP) returning to power after a landslide victory in a parliamentary election Sunday, concerns are mounting in Korea that a rightward shift will intensify Japan’s refusal to admit and apologize for wartime atrocities like women forced into sexual slavery.

“There are many concerns being raised in regards to Korea-Japan relations due to pledges that have been introduced by [LDP leader Shinzo] Abe,” said a senior official from the Ministry of Foreign Affairs and Trade yesterday. “For now, we will only have to wait and see.

“We will carry out necessary communication [with the new Japanese government],” he said.

In Sunday’s election, the LDP won 294 seats in the 480-seat lower house of Japan’s parliament, which has been led by the Democratic Party of Japan (DPJ) since 2009 under outgoing Prime Minister Yoshihiko Noda. It’s widely expected that Abe, the incoming Japanese prime minister, will form a coalition government with New Komeito, which won 31 seats, to hold a two-thirds majority needed to overrule decisions made by the upper chamber or alter Japan’s constitution.

The DPJ only won 57 seats compared to the 230 it controlled before Sunday’s election.

“We hope the new LDP leadership puts emphasis on the importance of improving relations with neighboring countries,” the official said. “Also, we hope Korea and Japan will jointly contribute to promoting peace and prosperity in the region.”

While relations between Seoul and Tokyo have soured over the past several years due to the sovereignty issue over Dokdo, Korea’s easternmost islets, and Japan’s recalcitrance about its wartime misdeeds, there have been concerns that the relations would really deteriorate with a further shift to the right.

Abe, an ultra-right wing politician poised to lead the nation for a second time, promoted during the campaign several nationalistic policies that could threaten neighboring countries, including Korea and China. Abe has proposed revising the nation’s pacifist constitution to bolster Japan’s military capabilities.

The LDP leader also pledged that he will scrap or reinterpret official statements issued by former leaders or officials that apologize for military atrocities during World War II, including the so-called Yohei Kono statement issued in 1993 admitting the Japanese military’s involvement in operating “comfort stations” in which the military forced Korean women into sexual slavery.

“We have expressed a firm position on [reinterpreting] the Kono statement,” the official said. “We expect the LDP to act with more responsibility [over past issues] once it comes into power.”

Abe has also expressed his intention to upgrade the status of Takeshima (Japan’s name for Dokdo) Day by having the Japanese government host the celebratory event instead of the Shimane Prefectural Office, which designated Feb. 22 as Takeshima Day in 2005. The prefecture is the area of Japan closest to Dokdo.