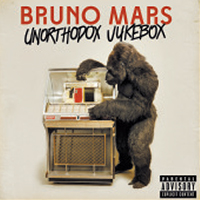 Bruno Mars likes to mix it up. Almost every song on his second album dabbles in a different genre.

The 27-year-old singer-songwriter-producer shows growing sophistication, musically and lyrically, on “Unorthodox Jukebox,’’ a retro-pop collection of 10 tracks with elements of rock, funk, country and reggae, even a heartbreaking piano ballad.

Mars hinted at his versatility on his 2010 debut, “Doo-Wops & Hooligans,’’ a set of love songs that yielded the hit singles “Grenade’’ and “Just the Way You Are,’’ which won a Grammy Award.

He draws from a broader range of musical influences here, recalling Michael Jackson, Parliament and even The Police. And there’s still love, but also lots of sex.

He channels Prince on “Gorilla,’’ all prowess and desire. “You got your legs up in the sky,’’ Mars sings. “You know what I like. You’re a dirty little lover.’’ He proclaims “your sex takes me to paradise’’ on the 1980’s-tinged single “Locked Out of Heaven.’’ And on the island-style reggae tune “Show Me,’’ he urges his lover: “You say you’re a woman who knows what she likes, then show me.’’ AP