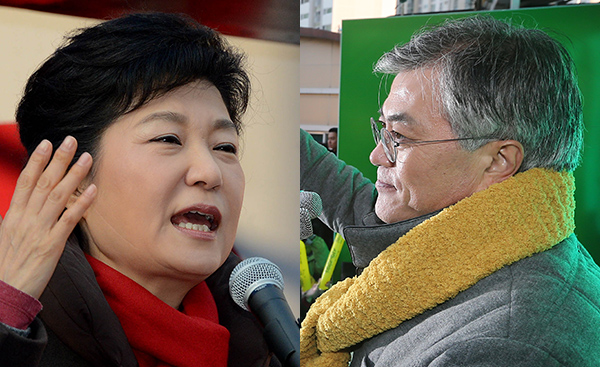 The presidential election is in the middle of a thick fog. A kid saw the cover photos on a newspaper and said, “The game is over.” One candidate was waving with fingers spread out, and the other candidate clenched a fist. The kid thought that in the game of rock-paper-scissors, paper defeats rock.

The election is so tight and unpredictable that people resort to this kind of joke. Of course, there are indirect indicators. The stock market is very sensitive, as it involves real money. Yesterday, stocks related to Park Geun-hye rose, while stocks associated with Moon Jae-in dropped. However, stock prices and opinion polls are nothing but the numbers. The turnout is also a variable. Now we can only learn the result once the ballot boxes open.

In 2007, President Roh Moo-hyun was pessimistic about his presidential candidacy. At a lecture at Wonkwang University, he said, “It is impossible to win with the combination of Honam [South and North Jeolla] and Chungcheong. No matter how I calculate, we don’t have Rhee In-je,” who can absorb the conservative Yeongnam (South and North Gyeongsang) voters.

In this election, two more factors are absent. First, there is no figure like Kim Dae-yeop - the power broker who played a pivotal role in the defeat of then-opposition Grand National Party candidate Lee Hoi-chang by falsely raising suspicion about his son’s alleged military service dodge in the 2002 presidential election. The “military scandal” was the pinnacle of negative propaganda. The negative offensives of the ruling and opposition parties today are only jokes compared to the devastating military scandal. Moreover, there is no conspicuous offer to attract Chungcheong voters, just as the capital relocation plan had appealed to them in the last election.

Nevertheless, Moon Jae-in displayed amazing power to make the election a close match. It might not have been possible if it weren’t for Ahn Cheol-soo, the software mogul-turned-professor who dropped out of the race. Thanks to Ahn’s support, however, Moon could bring together the voters in their 20s and 30s, and the Unified Progressive Party candidate Lee Jeong-hee’s resignation would bring leftist votes for him as well. The conservative voters also show solid support for Park.

This time, there are no variables like Rhee In-je or Chung Mong-joon. Both sides have gathered all the votes they can. And the presidential election has become an unprecedented confrontation of generations, an all-out battle between the conservatives and the liberals. Still, it is questionable if it is desirable for the presidential election to become such a head-on clash.

Park shouts for period change, and Moon for political change. They sound like the unripe slogans of novice candidates. The Republican Party of the United States started as a reformist group based in the American northeast. Abraham Lincoln is the most notable figure, having accomplished emancipation in 1860. The Democratic Party has long been a minority. The dramatic turnaround was the Great Depression in 1929. The Democratic Party’s Franklin Roosevelt swept over the northeast region with the New Deal. For more than four decades, the Republican Party remained low profile. Its chance to strike back came with the conservative tendency after the Vietnam War and its relocation of a stronghold to the Midwest. You can only speak of period change and political change with such dramatic and all-out transformations.

No matter who wins the election, it will surely be a half victory. Both sides have focused on primitive instincts such as regional and ideological sentiment rather than appealing to the reason of the voters. It is sickening to see the parties taking out votes from their traditional strongholds, as if they are withdrawing cash from an ATM machine. They were too busy attracting swing votes and getting points for finding mistakes in the other candidate rather than promoting a vision for the future.

Most worrisome is that both Park and Moon are parasitic on the politics of legacy. They both have solidified a political stance after the tragic deaths of their political fathers. Their policies are buried in vain promises, and fancy populism covers up their weak leadership.

We need to pay close attention to the defeated. We have all seen the winner engrossed in their victory. The defeated candidate will be faced with a devastating fate. However, historically, it was the fate of the loser to reform and bide their time for comeback. The Saenuri Party is servile to rely on older voters and fear a high turnout. The Democratic Party should also stop talking about political engineering and regretting not having Rhee In-je or Kim Dae-yeop. If they adhere to the existing structure and speak of new politics and generational change, they are virtually deriding all voters.