Price declines on paper not felt in purses

Price declines on paper not felt in purses 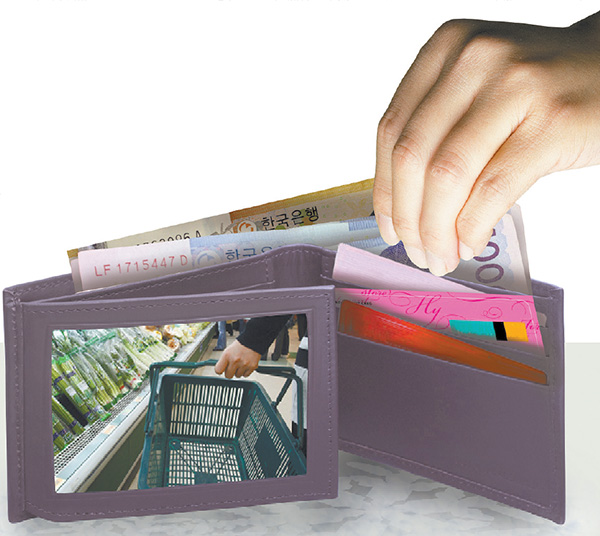 One of the legacies of the Lee Myung-bak administration government could have been the taming of skyrocketing consumer prices this year.

But analysts say the government was so obsessed with the goal that it relied on some under-the-table statistical tricks.

The country’s Consumer Price Index (CPI), compiled by Statistics Korea every month, has continued falling throughout the year from 4.2 percent in November 2011 to a new low of 1.6 percent last month.

Finance Minister Bahk Jae-wan has been trumpeting the achievement, saying the government has effectively monitored and managed prices for the sake of the average Kim.

The man on the street doesn’t see it that way, and certainly his wife doesn’t either.

The Korea JoongAng Daily Monday followed an ordinary homemaker, Park Jin-soo of Seoul, to see if inflation in her life has really been eased. 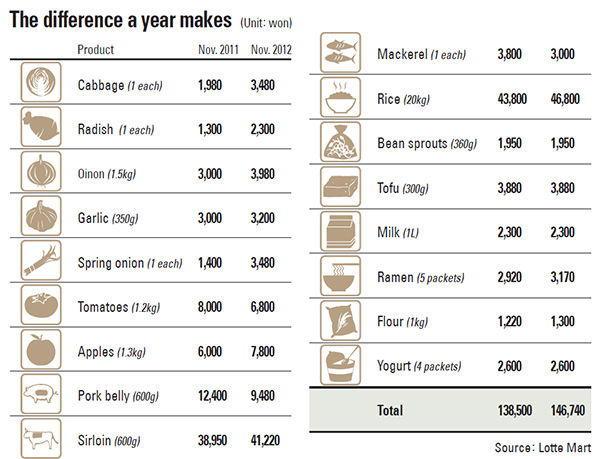 After buying a car full of food, ranging from rice and pork to snacks for the children, she compared Monday’s receipt to one she got a year earlier to examine the changes in total spending.

Surprisingly, her total expenditure was 145,500 won, up from 138,000 won from a year earlier, even though she bought similar things.

“Every month, I heard on the news that the CPI went down, but I still feel things are tight,” Park said.

“I am most concerned about food prices, since I have two sons in elementary school,” Park said. “In the last two years, I have never seen my spending on grocery shopping decrease like the index did. I think the index is useless for the general public.”

According to statistics experts, one reason for the difference in the index and how consumers feel is that the index reflects fewer items whose prices fluctuate a lot, while covering those with relatively stable prices.

This November, the price for cabbage jumped 90.3 percent, followed by spring onions at 89 percent and radishes at 54.4 percent.

However, the weight of fresh foods on the index is low compared to items with stable prices. The weight for cabbage prices is 1.7 (out of a basket of 1,000), and 1.1 for both spring onions and radishes.

That is why President Lee has been so sensitive about gasoline and utility prices during his term. He publicly denounced local refiners for raking in excess profits and accused them of price-fixing.

This year, the government pressed local retailers even harder to reduce prices in its pursuit of a “fair society.”

In the first 11 months of 2012, the country’s antitrust agency, the Fair Trade Commission, collected a record amount of fines against local companies for overcharging, which almost reached 1 trillion won.

Nongshim and three other local instant noodle makers were found to have colluded for nine years to fix prices and were ordered to pay 135.4 billion won in combined fines, the largest for the year.

“Food prices remained high this year, but statistics make the latest hikes look like decreases because those prices jumped much more last year,” Lee said. “This is called a base effect.”

Pork and mackerel are most affected by the base effect, Lee said.

The researcher also said the government changed its standard. It now measures prices of 481 items based on 2010 prices, setting them as the standard 100. The previous standard was from 2005.

Fresh food prices jumped 21.7 percent in 2010 from a year earlier, but such high prices are now serving as standards, he said.

“Although the prices further rose 7.1 percent in 2011 and 4.3 percent as of this summer, it seems like the rises aren’t that significant compared to the 21.7 percent,” Lee said. “But prices are actually flying high.”

Hong Jong-hak, a lawmaker from the United Democratic Party, criticized the statistics agency in the latest session of the National Assembly audit for unfairly changing the calculation method.

Hong accused the agency of deliberately excluding monthly premiums for life insurance policies in favor of the insurance industry. Insurance premiums are given 20.7 in weight, the fifth greatest after 2-year deposits and monthly payments for houses, gasoline prices and mobile phone bills, according to the government body.

The government also excluded gold rings from the index, being aware of rising gold prices.