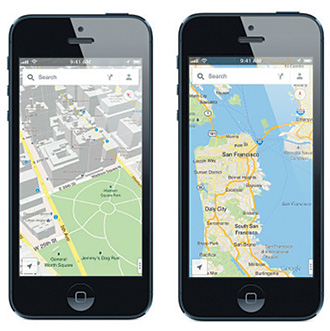 Like a lot of people, I was happy and relieved to see Google Maps return to the iPhone.

I’d been frustrated with the Apple mapping software that had replaced it three months ago. For one thing, it didn’t have public transit directions, a feature important for New Yorkers like me. Apple’s mapping app also wasn’t as good as the old Google app in finding destinations. I often had to type full addresses rather than just the name of a business.

I tried to get by with maps on Google’s mobile Web site instead, but I found that clunky and slower to start up. So when Google Maps returned this week as its own app, I installed it right away. Although it may not be perfect, it is a big step up from both Apple’s current software and the old Google-powered Maps app that Apple kicked off the iPhone in September.

For the first time, Google Maps has turn-by-turn voice navigation on the iPhone, and with that, automatic recalculation of routes whenever you make a wrong turn. The feature had been available on Android phones since 2009, but Google’s previous refusal to bring it to the iPhone is believed to be a key reason Apple decided to develop its own technology.

The new app also offers public transit information for more than 500 cities around the world. That’s a feature Apple’s own mapping software lacks.

The turn-by-turn driving directions work exceptionally well. It quickly and accurately calculated the most direct route from The Associated Press’ headquarters in Manhattan to my home in the Bronx.

It offered a variety of routes for traveling from New York to Boston.

The app’s voice directions came in the form of a pleasant female voice that sounded much more human than the GPS system my husband had in his car years ago.

She was also more pleasant to hear than Siri, the virtual assistant on my iPhone 4S.

The maps themselves are clear and easy to read, and directions were easy to understand. But don’t worry if you’re the type of person, like my husband, who finds voice directions annoying. There’s a mute option.

Google’s app usually gives you the choice of a couple of routes. Unlike Apple’s app, Google Maps lets you automatically exclude routes that involve highways or tolls.

You can also add an overlay showing how bad the traffic is along the way, along with satellite and extensive street-level photography of the area you’re traveling through. Those features are much more limited in Apple’s app.

To test out the walking directions, I took to the streets of New York. I didn’t get as many bells and whistles as the driving directions. For instance, there was no nice lady to tell me which way to go, because the voice directions only work for driving.

In addition, the app doesn’t automatically recalculate your route if you miss a turn. The little blue dot marking your location just continues on its merry way in the wrong direction.

To get the voice and the recalculations, you’d have to walk with driving directions, but you might then find yourself walking farther as the app won’t let you walk against traffic on a one-way street or through a park on recreational paths. AP