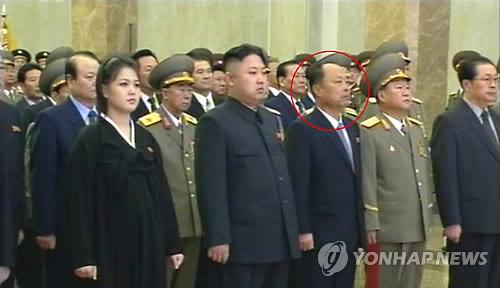 A mystery man seen standing next to North Korean leader Kim Jong-un in recent commemoration ceremonies is likely to be the head of the country's arms development center, a Seoul official said Tuesday.

Wild media speculation emerged over the identity of the middle-aged man after he was seen standing next to Kim during the country's commemoration ceremonies for late leader Kim Jong-il on Sunday and Monday.

North Korean figures' positions at official events are key signs indicating their ranks and levels of importance in the regime.

The Seoul government official said the man is likely to be Choe Chun-sik, the head of the Second Academy of Natural Sciences, which is in charge of developing military weapons.

"We presume Choe Chun-sik is related to the North's recent launch of a long-range rocket," the official said on condition of anonymity.

The communist country successfully fired off what it calls a long-range rocket carrying a "working satellite" on Dec. 12, with the outside world condemning it as a cover for testing rocket technology used for launching missiles.

The Second Academy of Natural Sciences is known to be the Workers' Party of Korea's sub-unit for researching and developing military arms and is on the U.S.'s sanction list.

Another Seoul government official also raised the possibility that the mystery man could be the chief secretary of either late leader Kim Jong-il or the current leader.