Vaulter opens up about life after London Games

Vaulter opens up about life after London Games 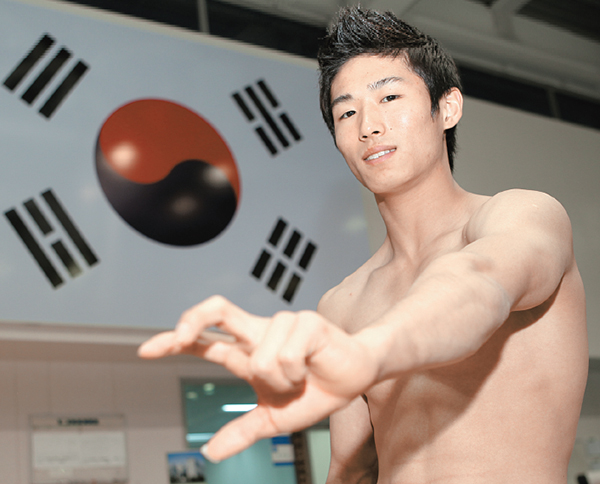 Yang Hak-seon poses during a training session at the Taeneung National Training Center in northern Seoul on Dec. 17. Yang, who became Korea’s first gymnast to win an Olympic gold medal, talked about life after London. By Kim Jin-kyung


Vaulter Yang Hak-seon, Korea’s first gymnast to win a gold medal at the Olympics, said he wouldn’t be able to stick his landing as perfectly as he did in London if tried to perform his triple twist on that stage again.

The 20-year-old put Korea on the gymnastics map after taking the gold medal in the vault during the London Games in August. In one of two attempts in the final round, Yang went with his trademark routine, which was officially named after him for its unprecedented technical difficulty, and beat Russia’s Denis Ablyazin.

It was no fluke as Yang, who is also the defending world champion, continued his winning ways after the Games. Ilgan Sports, the JoongAng Ilbo’s sports daily, sat down with the gold medalist after he returned from Japan, where he won easily at the Toyota Cup, an international competition held last weekend.

Despite his success and growth in the sport, Yang said again his London vault was as good as it gets.

“If I went back to the time, I couldn’t land it as perfectly as I did.

“Honestly, I don’t remember how I did it. If you’re nervous, you get to a certain point where you don’t know whether you are nervous or not. That was exactly how I felt. My mind went just blank.”

That pressure must have been what kept him off balance when landing his first attempt. Yang took some steps forward after completing the twist, which deducted points from his “Yang Hak-seon” triple jump.

He said he had felt more pressure before the second attempt, but could keep his composure and stuck the landing.

He said a similar experience two years earlier, in which he collapsed under pressure, gave him the strength to succeed in the second attempt. He finished fourth during the 2010 world championships after blowing two tries, with the second one worse than the first.

“I think fourth place is the worst place you can get,” he said.

“If you do it worse, it would be better because you don’t feel bad about blowing the chance to get a medal,” he said.

Korea finished in fifth place in the medal count at the London Games with 13 gold, the country’s highest finish at an Olympics held overseas (Korea finished fourth at the 1988 Seoul Games). And many of the country’s athletes emerged from obscurity to stardom in London.

Yang was at the center of attention after his Olympic performance. His parents were living in a makeshift home inside a vinyl house built next to a small farm they managed in Gochang, North Jeolla. After he won the gold medal, a local company stepped forward to offer him a house.

He said his parents still live in the same vinyl house because the apartment unit the company promised to give him is still under construction. He said a regional county office is also building a house for his parents near the vinyl house.

He appreciated the attention and response from the public.

“It has turned around my life,” he said. “It presented me with a heavenly opportunity.”

Yang said that his rising popularity has also kept him from being himself.

“One thing that I don’t like about the attention is that I have to care about how people think of me,” he said.

“I am just the same person I was in the past, but some other people think of me as arrogant .?.?. That made me develop symptoms similar to depression.”

He said that while he has experienced success, there is more to come his way.

“I wouldn’t say that my life is a success outright. I don’t know what will happen after I retire as an athlete.

“I can’t can hastily conclude as to whether my life is a success or not until I settle down [with a good post-retirement career]. My first goal after retirement is to become a college professor.”