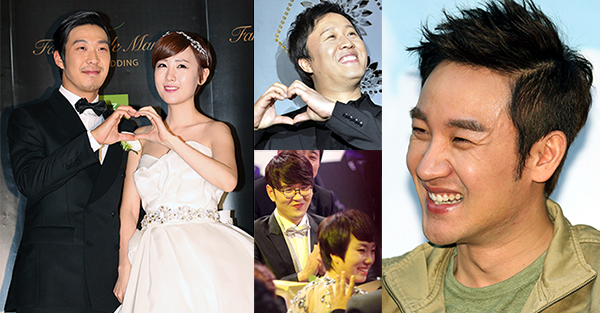 A growing number of TV celebrities break news of their weddings on their shows. Clockwise from left: comedian Haha and singer Byul; Jung Jun-ha; actor Uhm Tae-woong;Yoon Hyung-bin and Jung Kyung-mi all announced their engagements on television.[Ilgan Sports/YONHAP]


It has become de rigueur for celebrity couples to announce their marriage plans on the TV shows they star in.

The audience on “Gag Concert” could be excused for thinking it was a joke when Yoon Hyung-bin and Jung Kyung-mi declared: “We are going to be married on Feb. 22.”

Rather, it is only the latest in a spate of such small-screen announcements. Last month, Uhm Tae-woong announced his engagement on an episode of “1 Night 2 Days,” saying: “After two days of knowing her, I knew I wanted to marry her.”

Comedians Jung Jun-ha and Haha started the trend in August on their variety program “Infinite Challenge.”

Industry insiders attribute the on-screen wedding announcements in part to celebrities’ desire to get close to their fans.

“TV stars usually say, ‘I want viewers to be the first to know about my marriage.’ They will likely gain viewers’ favor and trust, and most people feel close to celebrities through this kind of event,” said an entertainment agency representative.

Yet a wedding announcement on the set is not all about winning the hearts and minds of fans. In the case of Uhm, the decision was more about loyalty.

The actor suggested his idea to announce his marriage plans to the producer and staff of the TV series.

“Uhm wanted to express his gratitude to the program and staff. He and the program’s crew took extra care to keep the news confidential until airtime,” said one of the staff of “1 Night 2 Days,” who wished to remain anonymous.

“I heard Uhm was satisfied because he didn’t need to hold a press conference, and the announcement was made in a comfortable atmosphere with his co-stars.”

Conversely, producers have been known to suggest to stars that they announce their personal news on TV.

“Producers of ‘Gag Concert’ actively encourage the comedians to bring their private affairs into their segments to increase the viewership and attract publicity,” said a representative of the comedy show.

Comedian Lee Seung-yoon also made a public marriage announcement in one of his corners on “Gag Concert.”

“It is important for comedians to build a good relationship with producers, and comedians also want to draw more attention to their programs,” said the “Gag Concert” staffer. “It’s a win-win situation.”