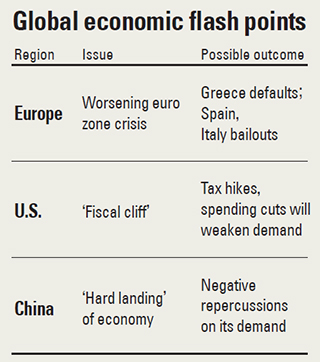 President-elect Park Geun-hye’s biggest economic challenge will be to navigate hazards from abroad, which have proliferated since the global financial crisis starting in 2008.

“Korea relies on heavily on trade and our stock market is open to foreigners,” said Kim Hak-kyun, a chief analyst at KDB Daewoo Securities. “Market movements overseas can be more important than local economic variables.”

On Tuesday, the United Nations released a “World Economic Situation and Prospects 2013” report that made for anything but sanguine reading.

The report said growth of the world economy weakened considerably during 2012 and is expected to remain “subdued” in 2013 and 2014.

According to the report, the global economy is expected to grow at 2.4 percent in 2013 and 3.2 percent in 2014. This is a downgrade from the UN’s forecast six months ago when it predicted 2.7 percent growth for 2013 and 3.9 percent for the following year.

It warned of the possibility of a global recession.

“A worsening of the euro area crisis, the ‘fiscal cliff’ in the United States and a hard landing in China could cause a new global recession,” the team leader for the report, Rob Vos, said in a release. “Each of these risks could cause global output losses of between one and three per cent.”

President-elect Park acknowledged during her campaign that Korea needs a better plan than in the past to overcome threats from abroad.

“The world economy is changing rapidly and a global economy crisis is looming,” Park said during the campaign. “Major countries’ leaders have also been changed and we need to overcome these challenges at both home and abroad.”

Local economists have different opinions on which global flashpoint is most threatening to Korea. They agree that Korea is not free from risk from any of them.

The euro zone crisis has calmed since the European Central Bank started buying bonds of crisis-hit countries with the Outright Monetary Transactions (OMT) program, but analysts warn there is still a chance of Greece defaulting and Spain and Italy asking for bigger bailouts.

The “fiscal cliff” in the U.S. is a big concern since the country is one of Korea’s largest trading partners. No one knows if U.S. President Barack Obama and House Speaker John Boehner will reach an agreement to stop automatic tax increases and spending cuts that are sure to put the U.S. into recession and weaken the purchasing power of the country’s consumers, who are Korea’s customers.

In regards to China’s “hard landing,” or a sharp economic slowdown, Korea is seen as one of the three countries in Asia to be hit the hardest if it happens, along with Taiwan and Thailand, according to global credit rating firm Fitch.

In its analysis, Fitch said that a hypothetical hard landing that resulted in a cumulative loss of 4 percentage points of Chinese GDP growth in two years would slow global growth by 1.5 percentage points.

Analysts say President-elect Park can’t control world events, but she could give the market a clearer idea of her economic policies.

Corporations have been delaying investments while waiting for the presidential election results, and government departments have been postponing major tasks, thinking priorities could be changed under the new government.