Older voters made all the difference

Older voters made all the difference 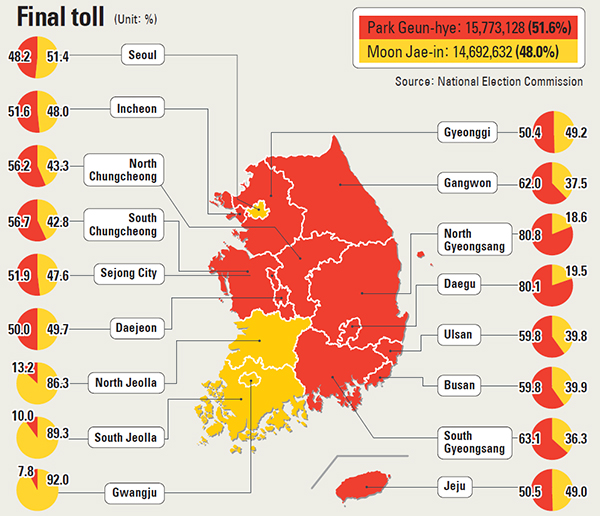 Strong backing by conservatives in their 50s and older worried about the economy and North Korea overcame liberal supporters mainly in their 20s and 30s in the country’s 18th presidential election on Wednesday.

In exit polls, Park Geun-hye received 62.5 percent of the votes from those in their 50s while Moon Jae-in scored 37.4 percent.

Park received 72.3 percent support from those in their 60s and older while Moon only received 27.5 percent. For the 40s age group, Park scored 44.1 percent while Moon brought in 55.6 percent.

Analysts said that there were more hidden conservative votes that weren’t reflected in the exit poll.

They stated that about 40 percent of the voters were in their 50s and older. This age group was considered to be worse than young voters at generating public sentiment as they generally do not express their opinions on the Internet.

Analysts said opinions expressed on the Internet and SNS were considered the opinions of the nation as the Internet has become the most powerful communication source. 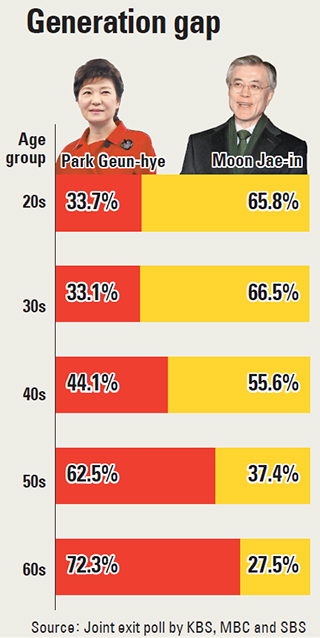 But as the presidential race turned into a face-to-face competition with a sole representative from the conservative and liberal parties, these older conservative groups who were quietly watching the campaign progress aggressively cast their ballots and gave their support to Park.

The conservatives judged that Park’s sufficient political experience and stable leadership were more appropriate for a country in the midst of concerns about an economic slowdown and security challenges by North Korea.

“We judge that many conservative votes were not reflected in opinion polls that were conducted prior to the election,” said Kim Hee-gyeong, a political consultant.

During the election campaign, President-elect Park highlighted national security issues related to the North, including the NLL issue. The ruling Saenuri Party claimed that there is a transcript in which the late president, Roh Moo-hyun, promised to late North Korean leader Kim Jong-il to evacuate U.S. forces from the country during the 2007 summit and a long-range missile launch that the conservative voters considered important.

The exit poll, which was conducted by KBS, MBC and SBS and was released at 6 p.m. Wednesday, predicted that the conservative candidate Park would beat her rival Moon by a narrow 1.2 percent margin by scoring 50.1 percent of a total of 30.7 million valid votes with Moon at 48.9 percent.

But when the ballot count was finished at 5:21 a.m. yesterday, the gap between Park and Moon widened by 3.6 percent, as the conservative scored 51.6 percent of the total votes while the liberal scored 48 percent.

Voter turnout was 75.8 percent, the highest since the 1997 election that gave liberal Kim Dae-jung power for the first time in Korea’s history. The turnout for that year was 80.7 percent.

Park lost to Moon in Bucheon and Gwangmyeong in Gyeonggi but dominated Pyeongtaek, Paju, Pocheon and Yeoncheon, northern border regions of Gyeonggi where many military establishments are located.

The Saenuri Party also judged that withdrawal of Unified Progressive Party candidate Lee Jung-hee, who was criticized for her pro-Pyongyang stance, from the race helped Park.

“Opinions that Lee decided to quit the race in order to help Moon have spread to elderly voters in these military regions,” a lawmaker from the Saenuri Party said.

Lee had recorded a 1 percent support rate, which is estimated to be about 300,000 votes, in previous opinion polls.

The UPP has received 2.7 billion won ($2.5 million) in state funds from the National Election Commission as the country’s fourth-largest party with six parliamentary seats, but it created hostility among voters as it refused to return the funds after Lee withdrew.

Voters in Daegu and the North Gyeongsang region, which are Park’s political grounds that are nostalgic for her father and late President Park Chung hee, also strongly united, contributing to her victory.