Seminar delves into challenges of multiculturalism

Seminar delves into challenges of multiculturalism 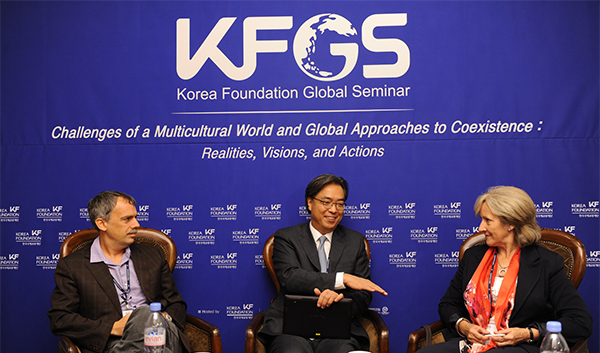 Kim Woo-sang, president of The Korea Foundation, center, talks with Irena Omelaniuk, senior adviser to the secretariat of the Global Forum for Migration and Development and Will Kymlicka, professor of philosophy at Queen’s University. The three met on the sidelines of the Fifth Korea Foundation Global Seminar to discuss the transition to a multicultural world.Provided by The Korea Foundation


As Korea sees a rapid increase in the number of multicultural households, Irena Omelaniuk, senior adviser to the secretariat of the Global Forum for Migration and Development, recommends that Koreans should work together to create policies that respond to social change.

“My message is that governments, politicians and the community all have to invest in making it [multiculturalism] work,” Omelaniuk said.

She met with Kim Woo-sang, president of the Korea Foundation, to talk about possible policies dealing with multiculturalism, along with Will Kymlicka, a professor of philosophy at Queen’s University.

The three sat down on the sidelines of the Fifth Korea Foundation Global Seminar on the “Challenges of a Multicultural World and Global Approaches to Coexistence.”

The seminar took place at the Seoul Mayfield Hotel from Nov. 29 to Dec. 3, and dozens of experts from around the world joined the five-day program.

Pointing to Australia as a potential model for Korea in adopting multiculturalism policies, Omelaniuk said, “In general, it [Australia’s policies] has been considered very successful.

“It’s not something that has evolved naturally, but it’s something the government and all parties have agreed upon to prepare to commit and invest money.”

Omelaniuk, for example, referred to a multicultural council that includes members from the aboriginal community, other ethnic communities, governments and nongovernmental organizations.

“They also map social cohesion surveys to understand what the sentiments are in the community so that early action can be taken, together with the community,” she said.

Professor Kymlicka, also attending the discussion with Kim, said, “Some of the relevant indicators [of whether multiculturalism policies are working or not] would be levels of inter-ethnic trust and the levels of prejudice.

“Another measure I think is political participation. I think it is really important for successful integration that the immigrants and their children are able to participate in the political voting process. Then we can measure things like whether they are likely to vote or whether they can run for office.”

Kymlicka said cases like that of Jasmine Lee, a Filipino-born Korean who was elected as a proportional representative for the ruling Saenuri Party in the April by-election, are important steps forward.

During the discussion, Kim, chief of the Korea Foundation, asked whether Korea is entering into a genuine multicultural society, given the fact that 2.5 percent of the Korean population are immigrants and that number is growing by 20 percent a year, “What matters is not the absolute percentage but how the numbers are changing, whether the change is rapid or slow,” Kymlicka said,

“If a country has gone from 0 to 2.5 percent in just a short period of time, that is a huge change in comparison to a country like France that has had a stable immigrant population of 10 percent,” he said.

When Kim asked for advice on how Korea could effectively and smoothly become a multicultural society, Kymlicka suggested a project called the Multiculturalism Policy Index, in which he is involved, to monitor multicultural policies in 21 Western democracies.

“The goal of the project is to come up with a standardized way to determine which policies are effective and at what point in time countries have actually adapted to the issues of multiculturalism,” he said.

“We wanted to provide an indicator that scholars and policy makers around the world could look at to be able to determine what specific policies countries have actually adopted, with the hope that this would actually allow us to test the various claims about whether these policies are working or not.”

The index would point out whether or not countries that adopted more multicultural policies are doing better in terms of economic integration of immigrants, social cohesion, trust and participation.

For now, Kymlicka’s research does not include Korea, but he said he is considering creating an East Asian version of the index that would include Korea and China.

“Our initial index covers 21 countries, but we would very much like to add countries in the future,” he said.