Harvard Med School prof to lecture at SNU in 2013

Harvard Med School prof to lecture at SNU in 2013 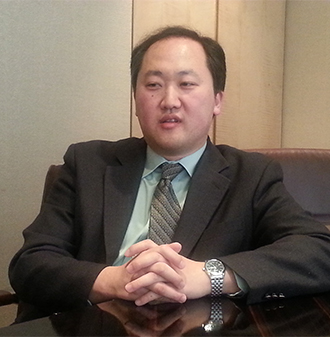 Charles Lee first left Korea when he was 2 with his parents looking for new opportunities in Canada. During his upbringing, Lee often saw his mother work tirelessly as a nurse to provide for the family. Knowing how hard his parents worked for him, Lee strived to excel academically.

About 40 years later, Lee came back to his native country as an associate professor of the department of pathology at Harvard Medical School to lecture as a visiting professor at Seoul National University Medical School. He begins in March.

“I have always been aware of Korea’s potential in genetics,” said the 43-year-old professor whose Korean name is Lee Jang-chul. “Seoul National University’s strong determination to foster its genetics program also impressed me to accept the offer.”

The country’s prestigious SNU is considering opening a department of medical genomics in line with its invitation to Lee. The Harvard associate professor told the JoongAng Ilbo he plans to conduct research on personalized cancer therapy, experimenting with mice as “avatars.”

Lee, who has worked at the Harvard Medical School since 2001, discovered for the first time that human DNA has structural mutations in its sequencing, or copy number variations. The mutations are known to cause inherited genetic diseases and certain types of variations prevent HIV and malaria.

With this discovery, Lee’s work in structural genomic variation in the human genome was recognized by the respected journal Science as the “Breakthrough of the Year” in 2007. The following year, Lee became the youngest recipient of the Ho-Am Prize, an award funded by Samsung that recognizes a Korean who has made an outstanding contribution to the development of science and culture. Lee was also named a fellow of the American Association for the Advancement of Science in recognition of his genetic studies in October of this year.

The organization that bestowed Lee with the fellowship was founded in 1848 and is the largest multidisciplinary scientific society in the United States and publisher of Science.

Lee told the JoongAng Ilbo that among his achievements, his mother was happiest when he told her about his new teaching position at Seoul National University.

“My mother always laments that she couldn’t go to university because her parents were not financially able to pay for higher education.”