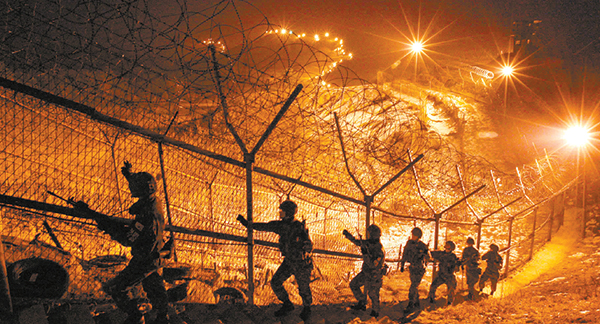 Soldiers of the Army’s 6th Division are on sentry duty on Saturday night on the front line of the inter-Korean border inside the Demilitarized Zone in Cheolwon County, Gangwon. [YONHAP]


Adding to speculation that North Korea’s recent rocket launch was intended to test its intercontinental ballistic missile (ICBM) technology, the South Korean Ministry of National Defense yesterday released a finding that Pyongyang had used red fuming nitric acid, known to be a highly toxic chemical, in its oxidizer tank to fuel the rocket’s first-stage propellant.

After the North launched the Unha-3 rocket on Dec. 12, the first stage fell in waters off the South’s west coast near Gunsan, North Jeolla, while the second stage fell into waters near the Philippines, according to the Defense Ministry.

“After studying the debris retrieved [by the South Korean Navy on Dec. 14], a group of [South Korean] experts were able to confirm that the wreckage was an oxidizer container that was filled with red fuming nitric acid,” said an official from the Defense Ministry yesterday.

“In general, liquid oxygen is used when launching a space vehicle [into orbit], but the North had used red fuming nitric acid as an oxidizer that can be stored at a normal temperature for a long time, proving the rocket was intended for testing its ICBM technology.”

According to one of the South Korean experts, fuming nitric acid was used in guided missiles developed by the former Soviet Union and is rarely used by countries with advanced space technology. It also said the acid is being used as oxidizer for the North’s Scud and Rodong ballistic missiles.

The debris was delivered to the Agency for Defense Development in Daejeon for further analysis by a group of 42 experts composed of military officials as well as scientists from rocket and weapons development agencies.

North Korea has officially claimed that its three-stage rocket launch was intended to send a scientific satellite, the Kwangmyongsong-3, into orbit, but the outside world, including South Korea, the United States and Japan, believed it was intended to test its ICBM technology, which is banned by United Nations Security Council resolutions. South Korea and the United States are trying to persuade China, North Korea’s closest ally, and also Russia to agree on introducing new UN Security Council resolutions that impose tougher sanctions on Pyongyang for violating UN rules.

The wreckage from the upper part of the first-stage rocket has four holes on the bottom, which are believed to be used to supply the oxidizer to the fuel tank.

A South Korean scientist inspects a piece of wreckage from the North Korean rocket Unha-3, recovered on Dec. 14 in the Yellow Sea, at the Agency of Defense Development in Daejeon. [NEWSIS]


Assuming the container stores about 48 tons of oxidizer, a simulation of the rocket by the South Korean military also showed that the propellant is capable of carrying a warhead that weighs up to 500 kilograms (1,100 pounds) and flying more than 10,000 kilometers (6,215 miles), far enough to reach the western United States.

Whether or not the rocket is able to make a re-entry through the atmosphere to hit a distant target, a key element of ICBM technology, was unknown because information on the second and third stages was not available, the Defense Ministry said.

The study showed that the alloy of the first-stage rocket itself was made of AlMg6, a mixture of aluminum and magnesium, and was equipped with a camera that can monitor engines, a propellant motor and fuel pipelines on its side.

In addition to the debris of the upper part of the first-stage rocket, the South Korean Navy retrieved three more pieces - a fuel tank, its combustion chamber and an engine connection rod - from the lower part of the rocket’s first stage in the Yellow Sea, one to two kilometers away from where the upper part was discovered, the Defense Ministry said yesterday.

The additional debris was sent to the Agency for Defense Development in Daejeon for an in-depth analysis. With the latest findings, Seoul has secured most of the parts of the first stage, which would provide additional knowledge of its missile technology.

Meanwhile, the North’s Korean Central News Agency on Saturday said that its leader Kim Jong-un has called for more satellites and rockets to be launched.

The remarks were made at a banquet honoring the scientists and technicians who participated in the Dec. 12 launch of its long-range rocket.

“The successful launch of the satellite, an aggregate of the latest science and technology, is a great event specially recorded in the 5,000-year-long history of the Korean nation which was provided by the wise leadership of Kim Jong-il and the Workers’ Party of Korea’s policy of attaching importance to science and technology,” Kim was quoted as saying by the KCNA in its English-language dispatch. “[The successful launch is] also a great auspicious event of all people, a product of the painstaking efforts and heroic struggle of you present here.”

The North also announced Saturday that 100 scientists, engineers and workers were given the title of national hero for their contributions to the rocket project.