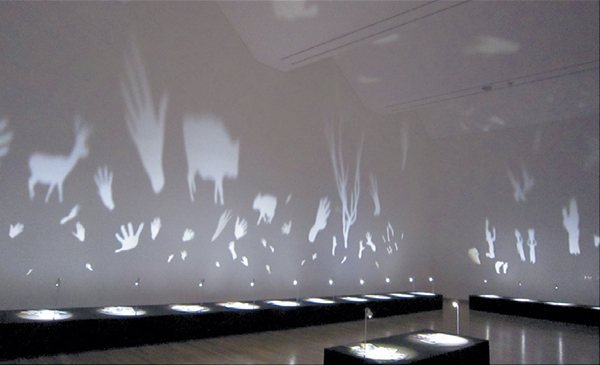 “Parallel World” by Lee Chang-won, is part of the “Your Invisible Shadow” exhibition ongoing at the Kumho Museum of Art in the art zone east of Gyeongbok Palace in central Seoul until Feb. 24. The show features contemporary art works focusing on intangible elements such as light, shadows and sounds. Provided by the museum

Viewers might be concerned that a contemporary art show focusing on the intangible is too conceptual and difficult to grasp. But the “Your Invisible Shadow” exhibition, features intangible elements such as light, shadows and sounds that will please viewers’ senses.

The exhibit is on display at the Kumho Museum of Art in the art zone east of Gyeongbok Palace in central Seoul.

A room on the museum’s third floor is dark, with luminous white silhouettes on its walls and ceiling.

One of the walls, with silhouettes of various hands, a bull and other animals, look just like a mystic contemporary version of a prehistoric cave. 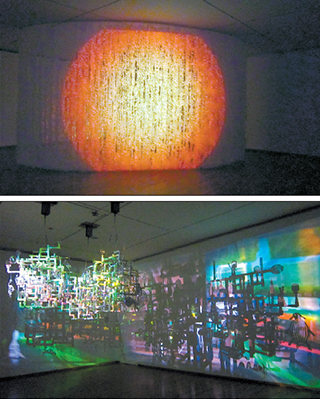 The hand images are in fact lights reflecting off of small mirrors, which were cut along the shapes of politicians’ and demonstrators’ hands in newspaper photos. The mirrors and the photos are put on a table installed along the wall.

Similarly, all the luminous white silhouettes in the work “Parallel World” by Lee Chang-won originated from images taken by photojournalists.

“With this work, I want to show that everybody, as well as art, cannot be unrelated with social or political issues,” the artist said.

The 40-year-old pointed out the white silhouette of a mother holding a baby surrounded with the silhouettes of various animals on another wall. It looks just like a nativity scene - the timing appropriate during the holiday season.

“The images are of a very young mother holding a baby suffering from starvation in Bangladesh, and those of the animals in other regions troubled with wars or natural disasters,” the artist said. “The luminous images look beautiful but are ironically from a miserable reality.”

On the second floor are two art works that will remind viewers of some lines in British poet William Blake’s “Auguries of Innocence” - “To see a World in a grain of sand /And a Heaven in a wild flower / Hold Infinity in the palm of your hand, / And Eternity in an hour.”

Artist Shin Sung-hwan’s “Bright” consists of a water tank, with droplets falling at consistent intervals, and the real-time projections of its images with rainbows formed on the walls. When the water drop falls, the amplified sound fills the room.

The other work is “Breathe” by artist Ha Won. It shows the image of a red dot projected on a screen made of white feathers. The dot continuously pulses, in accordance with the sounds of breaths and heartbeats, while swelling to fill the whole screen and then shrinking. It repeats this formation and destruction like a flower, the sun or the universe.

Media artist Hong Buhm’s work “Hide & Seek #5” will especially attract those who are interested in neuroscience and memory.

It consists of three sculptures hanging from the ceiling and their dizzying projections on the walls.

The three sculptures, each made of tangled pipes and various objects, are “a visualization of the streams of human consciousness,” the artist explained.

“There are three of them, as I think we go through several streams of consciousness simultaneously,” the 42-year-old artist said.

“When we encounter a new space, we associate it with our memories of senses and experiences to recognize it. In other words, we project our memories into the new space, so the projection in my work represents that process.”