Tarantino unchains ‘Django’ in the U.S.

Tarantino unchains ‘Django’ in the U.S. 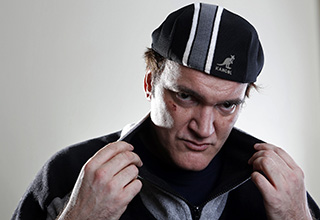 Tarantino, 49, has become synonymous with violence and dark humor, taking on the Nazis in “Inglourious Basterds” and mobsters in “Pulp Fiction.”

In “Django Unchained,” which was released in U.S. theaters on Christmas Day, he fuses a spaghetti Western cowboy action adventure with a racially charged revenge tale set in the 19th century, before the abolition of slavery in the United States.

Jamie Foxx stars as a slave whose freedom is bought by a former dentist, played by Christoph Waltz. The two set off as bounty hunters, rounding up robbers and cattle rustlers before turning their attention to brutal plantation owners in America’s Deep South.

Tarantino is well-versed in delivering violence. But the director said he faced “a lot of trepidation” about filming the slavery scenes.

He has already come under fire from some critics for the frequent use in the film of the “N-word” - a racial slur directed at blacks.

The director said he was initially hesitant to ask black actors to play slaves who are shackled and whipped, and even considered filming outside of the United States.

But a dinner with veteran Oscar-winning actor Sidney Poitier, whom Tarantino called a “father figure,” changed his mind after Poitier urged him to not “be afraid” of his film.

“This movie is a deep, deep, deep American story, and it needed to be made by an American, and it needed to star Americans. ... Lots of the movies dealing with this issue have usually had Brits playing Southerners and it creates this arm’s-distance quality,” Tarantino said.

Much of the film’s more graphic slavery scenes, such as gladiator-style fights to the death, are drawn from real accounts. Reuters