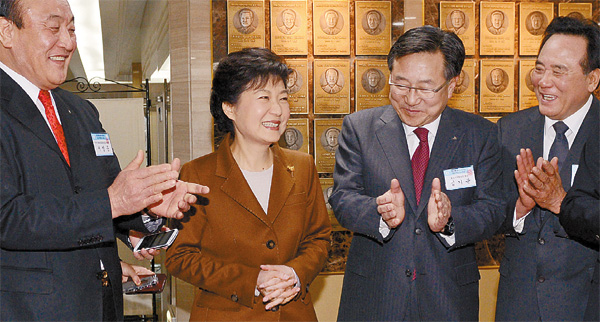 President-elect Park Geun-hye smiles at Kim Ki-mun, chairman of the Korea Federation of Small Business, standing at her left, as he congratulates her on her victory in the presidential election yesterday at the office of the federation in Yeouido, western Seoul. [Joint Press Corps]

To show her dedication to fairer trade, Park yesterday made visits to the Korea Federation of Small Business and then the Federation of Korean Industries, which is a lobbying group for big business.

In her meeting with the representatives of small companies, Park said her administration will focus on job creation and ending abusive business practices of the conglomerates.

At the FKI, the president-elect asked owners of the country’s largest business groups to refrain from layoffs and reckless expansion that eat into industries that support small and medium-sized companies.

“I will make sure that small companies no longer play the supporting roles in the economy and make them the leading actors,” Park said.

“Until now, Korea’s economy was solely driven by the conglomerates’ exports,” Park said at the Korea Federation of Small Business. “But from now on, I want to change the trend to allow large and small companies to prosper together and exports and domestic consumption to grow together.”

Park also promised to change the unfair relationship between conglomerates and their contractors, a key theme of her “economic democratization” pledge during the presidential campaign.

“The ladder of opportunity for a small company to grow into a stable, midsize firm and then to a large business group has been broken,” Park said. “It must be restored, and I will do that by working with the small and medium businesses.”

Park then met with business leaders at the Federation of Korean Industries. While she promised them support for investments to create jobs and help the economy grow, Park made clear that the conglomerates must change their business practices.

“For the large business groups to grow this far, many people gave support and made sacrifices and the government gave a lot of backing,” Park said. “So I believe the conglomerates are the country’s companies. Therefore, their goals shouldn’t just be maximizing their profits. They must pursue mutual prosperity with the community.”

She asked the conglomerates to refrain from massive layoffs at the start of difficult economic times. “I ask you to share your wisdom and shoulder the burden to keep the workers’ jobs at all costs,” she said.

Park also said companies should refrain from letting go employees who are still capable of work, asking the businessmen to guarantee jobs until the statutory retirement age.

She emphasized that she wanted to see fairer trade.

“I want the conglomerates to refrain from expanding into businesses that are the bread and butter of micro-enterprises,” Park said, criticizing the second and third generation chaebol families for operating in industries that are traditionally occupied by self-employed mom-and-pop shops.

Park said conglomerates are eligible for the government’s support if they are in need.

Park’s visit to the FKI was very different from her predecessor’s first meeting with the business lobbying group after his presidential victory five years ago. Lee Myung-bak promised that his government would be business friendly.

While job creation was the top priority for both Park and Lee, their solutions appear to be different. Park clearly took a step away from the Lee administration’s policies by promising balanced growth in exports and domestic consumption. She also put emphasis on both growth and so-called economic democratization.

Park’s spokeswoman Cho Yoon-sun said the FKI members asked Park to reconsider her policy to limit the cross-shareholdings in their corporate structures by saying there were benefits to the system.

Of the 20 members of the FKI leadership, 17 heads of conglomerates attended their first meeting with the president-elect. Among those attending were chairmen of GS, Hyundai Motor, LG, SK and Posco. Samsung Group Chairman Lee Kun-hee was in Japan and Samsung Life Insurance Chairman Lee Soo-bin attended on his behalf.