For a more responsible Blue House

For a more responsible Blue House 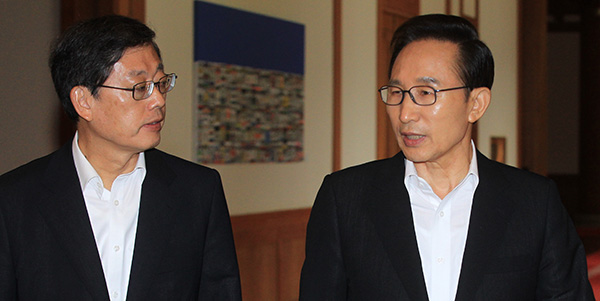 The political arena is filled with noise. The victor’s side is cheering while the defeated side is noisily talking about responsibility. Only one place is extremely quiet, and that is the Blue House. It sounds like a tranquil Buddhist temple. Officials are working as usual, but little is noticeable and it rarely attracts public attention.

But at the Blue House, records are set quietly and politics are in action. It is actually ironic because President Lee Myung-bak is known to have kept his distance from politics.

Lee’s term is nearing its end, but he is still a member of the ruling party. That may not sound so special, but it took 25 years for that record to be set.

They all said they did so to fairly manage the presidential election to choose a successor, but the choice really wasn’t up to them. The moment they gave up membership of the ruling party, they became powerless. But they had to.

President Roh Moo-hyun gave up his party membership in February of his last year in office. President Kim Young-sam left the party in November. “I left the Democratic Party, which was my political life,” President Kim Dae-jung said to express his feeling of an aching void.

When he left the ruling party, Roh said the president cannot fight the opposition parties because he is not the candidate for another term, and the ruling party also benefits from keeping a distance from him, rather than defending him, in the current system.

Although Roh tried to defend his choice to leave the party, he considered the departure as a failure in his political life.

It took years until President Lee managed to break what was considered an unavoidable pattern.

There is another new record and it is Prime Minister Kim Hwang-sik. When he was appointed, many thought he was a pinch hitter. But he is now slated to become the longest serving prime minister since 1980.

Aside from him, Kim Jong-pil, who served as prime minister in the 1970s, is perhaps the only other one.

Lee and Kim do not publicly promote Kim as actually playing an important role - nothing more than a mere ceremonial prime minister. But in this administration, Kim is playing a significant role, and many central figures in the government call Prime Minister Kim worthy of his title.

The two issues were the long-term challenges of Korean politics. It was considered inappropriate for the president to leave the ruling party at the end of his term because it won’t serve the purpose of responsible politics.

When the presidential candidate of the ruling party denies the recent past, it not only brings about political strife but also a situation where no one can accurately evaluate the performance of the president and the administration and hold them responsible.

Until now, a president excessively reigned during the first half of his term while he declined during the second half of his presidency. Although it was unfortunate, it could not be stopped because all presidential candidates of the ruling parties in the past wanted to differentiate themselves from prior presidents. And both the ruling and opposition parties always say that the system of responsible prime minister is the solution to end the system of the so-called imperial president.

Why were the two precedents set in this administration? Perhaps it is because of the partnership between President Lee and President-elect Park Geun-hye.

Since the Bundang by-election in April last year, President Lee has remained tight-lipped about his political views. While he had a thorny history with Park, Lee supported her until the end.

Park was once engaged in a confrontation with Lee over a policy, but she respected him as president. Although they were different, they worked together.

The ruling party’s performance in the elections over the past four years were also not bad. During Lee’s presidency, two general elections took place and the ruling party won the majority both times. During the local election, it managed to keep Seoul and Gyeonggi.

During his presidency, Roh Moo-hyun and his party suffered from the disgraceful defeat of 40 to 0 in the by-elections since 2005. Presidents Roh Tae-woo and Kim Dae-jung also saw their ruling parties lose the majority during their terms.

But the situation was different for Lee. Because the ruling party didn’t fail, the president was not shaken. The benefit of working together was larger for Lee and Park than the benefit of severing ties.

It, however, could be an accident, not a product of their own design. The direction of the path leading to a political revolution was decided by accident, “Why Nations Fail” stated.

Let’s remember that with the hope that President-elect Park and the Saenuri Party will institutionalize this system of responsible politics.