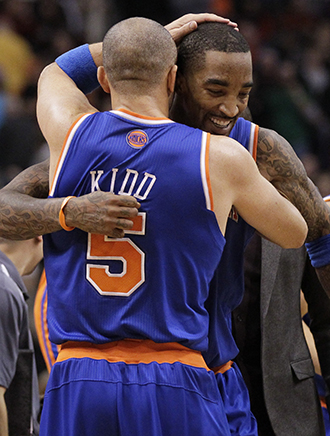 PHOENIX, Arizona - Without Carmelo Anthony and Raymond Felton, the New York Knicks still had enough to eke out a 99-97 victory in Phoenix, thanks to a pair of very late, very tough jumpers by J.R. Smith.

The first was a 15-foot fadeaway from just inside the key to tie it with 10.6 seconds left, the second a 21-footer from the baseline at the buzzer.

“I don’t know whatever words you want to use but he loves that moment,” Knicks guard Jason Kidd said. “I’m trying to figure out if that last shot was tougher than the one before that he took.”

The game-winner came on an inbound pass from Kidd after the Suns turned it over with a second to play.

Jared Dudley had a career-high 36 for Phoenix, including two free throws that put the Suns ahead 97-95 with 34.5 seconds to go.

New York was without the NBA’s No. 2 scorer in Anthony (hyperextended knee) and Felton (finger), both hurt in the Christmas day loss to the Lakers in Los Angeles.

The Knicks said X-rays on Felton’s right fifth finger revealed a fracture and the next course of action will be determined after his return to New York.

“We just have to go back and assess it and see where we are and go from there, but again, like I said, injuries occur,” New York coach Mike Woodson said.

“Key guys get banged up here and there and we have enough guys on our team that guys just got to step up and play until guys get back. That’s how it’s got to be.”

The Suns lost Goran Dragic in the final seconds of the first half when he was undercut by Smith on a layup attempt and fell hard to the floor. Dragic had bruises to his hip, back and wrist. Smith was called for a flagrant foul on the play. Phoenix coach Alvin Gentry knew there was no intent to injure on Smith’s part.