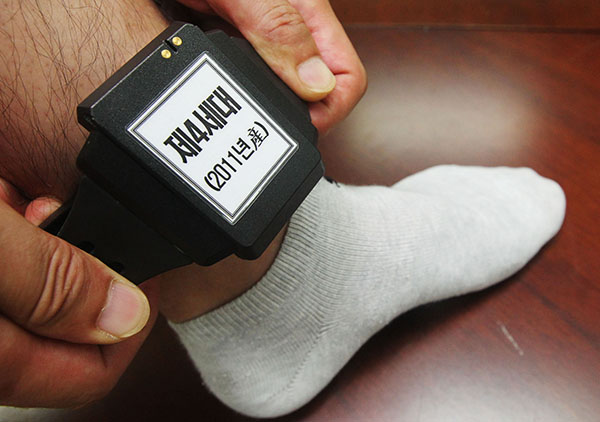 An electronic monitoring device worn on the ankle. [YONHAP]


The Constitutional Court ruled yesterday it is constitutional to put electronic tracking devices on sex criminals convicted before the relevant law was enacted.

On Sept. 1, 2008, the government started enforcing The Act on the Electronic Monitoring, Etc. of Special Criminal Offenders to cuff sex felons with electronic anklets so that police can monitor them after they are released from prison.

Prosecutors want courts to allow them to cuff offenders who were convicted before the law went into effect, especially after a series of gruesome sex crimes against children.

Human rights activists said that the cuffing is a violation of the “principle of non-retroactivity of punitive provision,” which bans punishing an offender under a law enacted after he or she was convicted, and also a breach of the “principle of anti-overrestriction,” which forbids the state from restricting an individual’s rights excessively.

A regional court in Cheongju, North Chungcheong, asked the Constitutional Court to take a second look at the law and decide whether it is constitutional to apply the law retroactively.

While the case was pending in the Constitutional Court, some released sex criminals committed repeat offenses.

“The act’s clauses, which order cuffs retroactively for those who were serving their sentences when the act was enforced or those who completed their sentences less than three years before the enforcement, is not a violation of the Constitution,” the ruling read.

“The order of electronic device cuffing is not a punishment but a security measure to prevent crimes,” the court said. “So it’s not a breach of the principle of non-retroactivity of punitive provision.

“It’s not excessive to apply the law retroactively to convicts considering the purpose of the bill,” the court said. “And the amount the public benefits by this will be more than the infringement of any individual’s benefits.”

As of Nov. 30, according to the Ministry of Justice, there are 6,916 cases that will be applied by the law retroactively, including 2,785 cases that the prosecution already requested.

“Because of the ruling of the Constitutional Court, we expect the number of those wearing anklets to rise more than three times,” the ministry said in an official statement. “So we will make all efforts to immediately cuff all of them and prevent further crimes by strengthening public surveillance.”