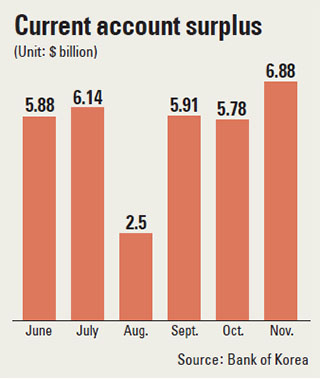 The nation posted a record current account surplus for November as exports gained ground, the central bank said yesterday, giving support to the already-strong local currency to the U.S. dollar.

The surplus reached $6.88 billion, up from a revised $5.78 billion in the previous month, according to the Bank of Korea. The current account is the broadest measure of cross-border trade.

This marked the 10th straight month in the black, with the cumulative surplus reaching $40.97 billion in the first 11 months of the year. The combined surplus stood much higher than the BOK’s estimate of $34 billion for the year as a whole.

The BOK said the country is expected to log another surplus for December, but it will be smaller than in November due to fewer working days and a weaker service account.
“The December surplus will be smaller, given the reduced number of working days and a seasonal rise in overseas royalty payments,” Yang Jae-ryong, director of the BOK’s monetary and financial statistics division, said.

The bigger surplus is expected to lend further support to the local currency, which has appreciated more than 7 percent to the dollar this year as foreign capital is flowing into Korea amid quantitative easing by major economies.

Analysts say that although the pace of the won’s gain will slow next year, it is widely anticipated to gain ground as advanced economies are likely to pump up efforts to make money available to stimulate the economic recovery.

“Upward pressure on the won will continue into next year, given major economies’ quantitative easing drives,” said Byeon Ji-young, a currency analyst at Woori Futures.

“But its ascending pace will likely slow as Korea will log a smaller current account surplus for next year than in 2012, and the local economy will post only a moderate recovery.”

Korea’s exports, which account for about 50 percent of the economy, showed some improvements in the fourth quarter, weathering the global slowdown and the won’s gain.

Korea’s goods balance logged a record surplus of $6.75 billion in November, up from a revised $5.17 billion the previous month, the BOK said.

The service account, which includes outlays by Koreans on overseas trips, posted a shortfall of $51.6 million last month, a turnaround from a surplus of $378.3 million in October.

Meanwhile, the capital and financial account, covering cross-border investments, posted a net outflow of $9.85 billion last month, compared with a net outflow of a revised $7.25 billion in October, the central bank said.

Earlier, the BOK forecast a smaller current account surplus for 2013 of $25 billion. The government predicted the surplus will reach $30 billion next year, smaller than its 2012 projection of $42 billion.