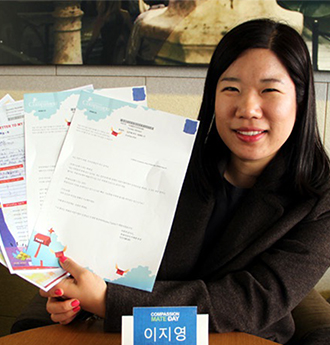 Lee Ji-yeong has been translating letters from foreign children sponsored by Koreans since 2007. [JoongAng Ilbo]

Lee Ji-yeong picked up a crumpled letter written in English.

“You are always in my prayers, my sponsor. I thank you and I bless you.”

A 10-year-old boy in Kenya had written a thank-you letter to his sponsor in Korea.

Lee has been translating such letters into Korean pro bono. In fact, she has been doing that for the past six years.

The 34-year-old is actually an employee at a trading firm. But in the summer of 2007, she came across letters written by foreign children to Korean sponsors.

It was then she decided that she would use her linguistic capabilities for something other than her regular job.

Translating English letters into Korean is no big deal for Lee, but the problem is finding the time.

Using her personal time, she has translated three to four letters a day, about 40-60 letters a month.

That is five times that of other charity workers who usually translate an average of three letters a week.

In the past six years, she has translated around 3,000 letters, the most prolific among the 1,800 letter translation volunteers in Korea.

Lee is a so-called “Letter Translation Mate” of Compassion Korea, a charity organization aimed at helping underprivileged children around the world.

The Letter Translation Mates are in charge of translating letters written by the children to their sponsors. They amount to about 8,000 to 10,000 a week. Half of them are delivered to volunteers like Lee.

“Sometimes I cannot decipher the writings of the children, or cannot think of the appropriate Korean word,” Lee says.

“When that happens I try imitating the writings basically to empathize with the children.”

In the process, she has learned unique characteristics of the children. Like for instance, Asian girls tend to talk about little things that happened in their everyday lives; African children tend to draw pictures to describe their daily lives.

“No matter where they are from, they always end their letters with thanking the sponsors,” Lee said. “I tend to get teary in that part.” Lee said she is particularly sad when reading letters of the children who haven’t received replies from the sponsors. One girl in the Philippines, she says, has sent over 20 letters to her sponsor in the past four years, not receiving one reply.

This is why Lee says what is just as important as the physical and material support is empathy and communication. She, too, has been sponsoring a boy in Haiti since last year.

Last week, she shared her knowledge and know-how in letter translation work in a lecture to the newbie Letter Translation Mates. “Anybody with intermediate English language skills can participate,” she said.