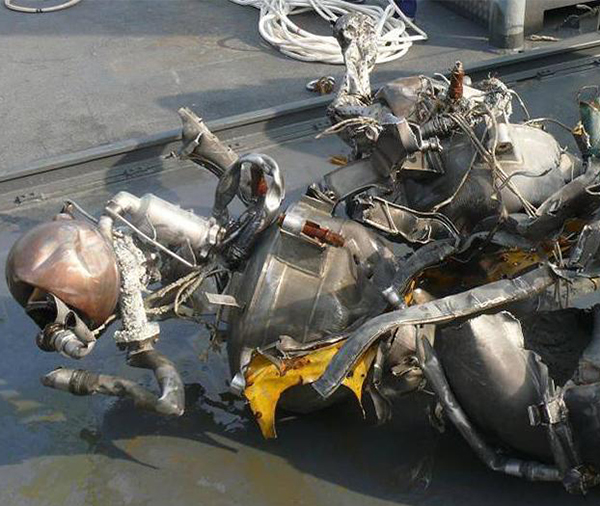 Part of what might be the engine of Unha-3, North Korea’s long-range rocket that was launched earlier this month, was retrieved by the South Korean Navy yesterday. [YONHAP]


The South Korean Navy retrieved debris that appears to be part of the engine of Unha-3, North Korea’s long-range rocket that was launched earlier this month, the Ministry of National Defense said yesterday.

“Over two days from Dec. 26, we were able to retrieve six pieces of debris assumed to be part of the engine at a location 160 kilometers [99 miles] off the western port city of Gunsan, deep underwater,” said Kim Min-seok, spokesman at the ministry. “The objects seem to have been severely damaged due to the impact at the time of the crash.” Kim said that the objects will be further analyzed by a joint investigation team composed of military officials as well as scientists from rocket and weapons development agencies. “Though the objects have been damaged, there will be no problem in analyzing and understanding the North’s missile technology,” he said.

On Dec. 12, North Korea launched its long-range rocket carrying a scientific satellite but the outside world including South Korea and the United States condemned the launch as a disguised test of missile technology and a violation of United Nations Security Council resolutions that ban Pyongyang from any ballistic activity. Since North Korea’s launch, the South Korean Navy has been putting out efforts to trace and retrieve objects.

The Navy sent rescue ships to the sea where the first-stage of the rocket fell, in waters off the South’s west coast near Gunsan, North Jeolla. The second stage fell into waters near the Philippines, according to the Defense Ministry.

Prior to the latest findings, the South Korean military has secured four other pieces from the upper part of the rocket’s first stage after undergoing a retrieving operation.

On Dec. 14, the Navy secured a large cylindrical container 7.6 meters (25 feet) long and 2.4 meters in diameter which was later confirmed by the investigation team as an oxidizer container that stored red fuming nitric acid to fuel the rocket’s first-stage propellant.

Red fuming nitric acid, according to the Defense Ministry, is known to be a highly toxic chemical that proves “the rocket was intended for testing its inter-continental ballistic missile technology.” The acid was developed by the former Soviet Union and has been used as oxidizer for the North’s Scud and Rodong missiles. In general, liquid oxygen is used when launching a space vehicle into orbit.

On Dec. 21, the South Korean Navy also retrieved three more pieces - a fuel tank, its combustion chamber, and an engine connection rod - from the lower part of the rocket’s first stage in the Yellow Sea. Currently, a total of 10 pieces from the North’s rocket have been retrieved.

“If the latest objects are confirmed to be part of the engine of the rocket, it will be a useful material for us to analyze North Korea’s rocket technology,” Kim said.