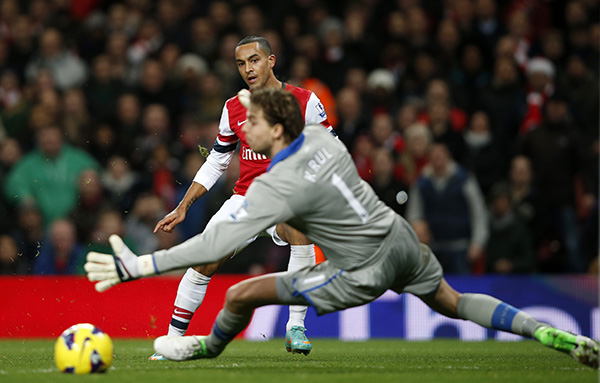 Theo Walcott of Arsenal scores his first goal during the Barclays Premier League match between Arsenal and Newcastle United at the Emirates Stadium in London on Saturday. The Gunners won 7-3. [XINHUA/YONHAP]


LONDON - Theo Walcott evoked memories of the great Thierry Henry when his dazzling hat-trick inspired Arsenal to a 7-3 win over Newcastle United on Saturday in one of the best Premier League games of the season.

The England winger has been pleading for the central striker’s role for some time and, playing in his new position, Walcott proved he has what it takes to fill the boots of the London club’s all-time top scorer Henry.

“He can play through the middle. I am convinced of that,” manager Arsene Wenger told reporters after Arsenal climbed to fifth in the table, 16 points behind leaders Manchester United.

“He can only get stronger there. He has done very well and it just typifies what I think he can do.”

Walcott was on target in the 20th and 73rd minutes before adding his third goal in stoppage time.

Former France striker Henry, who hit 228 goals in all competitions in two spells with the club between 1999-2012, applauded from the stands as Walcott produced his outstanding display in attack.

The 23-year-old burst free down the left and cut in to deliver a clinical finish beyond Newcastle goalkeeper Tim Krul for the opening goal.

Three times Arsenal led and Newcastle hit back to equalize on each occasion before the visitors were finally buried under a late avalanche of goals in an end-to-end encounter.

Walcott’s second effort was a powerful close-range strike into the roof of the net, but it was his hat-trick goal that had the stamp of Henry at his best.

The England international weaved his way round three defenders. He then stumbled and fell to the ground before picking himself up to delicately lift the ball over Krul from an acute angle.

Walcott, at the center of a contract dispute with Arsenal, cradled the match ball in his arms as he lapped up the adoration of the crowd at the end of the game.

“I think he loves the club and the club loves him,” said Wenger. “My desire is to extend his contract - I think he belongs here, and hopefully we can do it.”

New York Red Bulls striker Henry, who is training with Arsenal during the Major League Soccer off season, has been working closely with Walcott behind the scenes.

“I believe Theo takes advice from Thierry,” said Wenger. “It’s good when you need to talk to someone who has played in there [as a central striker].”