Tackling the sin of jealousy on a small Greek island

Tackling the sin of jealousy on a small Greek island 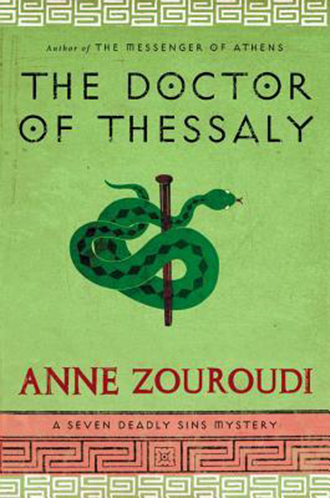 The Doctor of Thessaly


After a Greek bride is abandoned at the altar and her prospective bridegroom is found blinded from an acid attack, local villagers are baffled until Hermes Diaktoras, a portly man in white tennis shoes, arrives to help.

So begins “The Doctor of Thessaly,” the third in a series of detective stories by British-born author Anne Zouroudi that feature Hermes, who even as he works to unravel the crime has more than a hint of mystery about himself.

Zouroudi, who married a Greek fisherman and lived for a while in the remote Greek islands, spoke with Reuters about the origins of her sleuth and the themes that underpin her series.

Q. What started the series?

A. When I came back to England with my tail between my legs and a failed marriage and a small child in tow, I wrote the first book in the series, “The Messenger of Athens” kind of to get the issues out for myself, to understand for myself what had gone wrong and why it hadn’t been this idyll. I was expecting to live the rest of my life there. So I think “The Messenger of Athens” is quite a bleak book, really, sort of explaining to myself and to the world what I found in a very isolated and very tiny Greek community.

But the lead character in that book is obviously slightly worldly and I based him on my interest in Jungian archetypes, actually. The idea of this figure of justice had immense appeal to me and I think he really appealed to readers as well. So when the first book was published, Bloomsbury really liked that character and said, come on, we can do more with him.

So because the first book was based around lust and love, and there were very blurred lines between lust and love, I thought, you know, lust is supposed to be a sin so we could go through the seven deadly sins. That’s how the series was born.

You said you were working through issues, why choose the detective story form?

Because I wanted to write something that I would like to read, and I love to read crime .?.?. When I travel, I like to read books that are about the place that I’m visiting, and yet I could find very few novels of any description based in Greece.

It seemed to be a market where there was a bit of a dearth, actually. So I really wrote originally a book that I would like to read, and happily other readers seemed to like them too.

You said Hermes was kind of a Jungian archetype - how else did you come up with him?

The story of his appearance is actually quite an interesting one. In the Greek islands in winter, there isn’t very much to do. One Sunday afternoon, my ex-husband and I took a walk to the local cemetery because where else are you going to go? When we got there, there was another couple there, and one of them was a man I didn’t know. I hadn’t seen him before, which once again is very unusual in small Greek islands in winter.

He was a very elegant man. He was wearing a suit and a raincoat, and he had owlish glasses and a quite distinctive hairstyle, distinctive longish gray curls. He was standing on the cemetery wall and looking down onto the sea. He was such a striking character that when I came to think of a description of Hermes he immediately came to mind. But rather unglamorously, he turned to out to be the new manager of the bank of the island where I was living .?.?. I should say, though, that the bank manager was not wearing the white tennis shoes, they were another quirky detail that came from childhood.

So then he gradually developed?

The fact is, through the books Hermes never changes because it’s the nature of who he is and what he is, not to change. Readers can make of him what they will, but to me, he is an incarnation of the god Hermes. My theory on the gods is this: as we have slowly forgotten about them, the immortals have begun to age, very slowly. So over millennia Hermes has begun to age and become quite portly, he is going a bit gray. My theory is that if we started to remember the old gods - and I think to an extent that’s happening [and] the Greek myths are becoming quite voguish at the moment - perhaps he might reverse and revert to his original golden youth and become young and dashingly handsome again.

Are you doing books on all the seven deadly sins?

Yes, I’ve just finished the seventh. It’s out next June in the U.K. So we’re at a bit of a crossroads with Hermes right now, where should we go next?

So you’re not finished with him?

No, I don’t think so, because I have a quite big fan base here in the U.K. and abroad. People are just loving the character. They love the idea of this character who just turns up from nowhere, fixes everything and then quietly melts away .?.?. It’s at the heart of all crime fiction, really, but I think because Hermes is not a policeman and it’s based more on natural justice rather than legal justice, people find that really appealing. But now having done the seven deadly sins, where should he go next? I’m thinking the Ten Commandments, maybe. We’re still thinking about it. Reuters