Giants top Eagles 42-7, but don’t get to playoffs

Giants top Eagles 42-7, but don’t get to playoffs 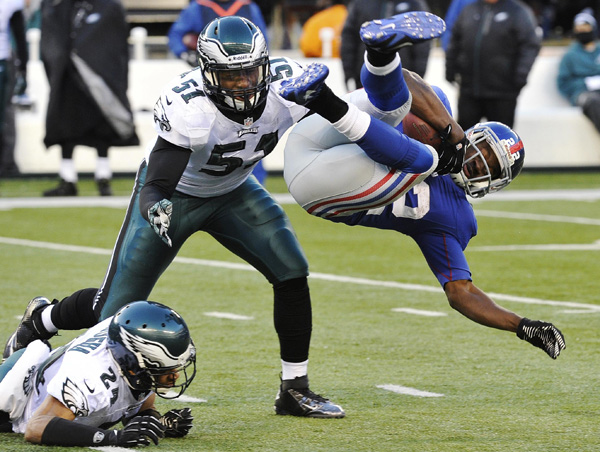 There will be no repeat championship for the Giants, not even a playoff berth. A 9-7 season wasn’t good enough this time around.

The Giants saw their playoff hopes end Sunday, minutes after a 42-7 win over the Philadelphia Eagles when Chicago beat Detroit 26-24.

“It happens that way,” Tuck said after the Giants rebounded from two bad losses and routed the Eagles in what might have been Andy Reid’s final game at coach. “I’ve been 10-6 and not made the playoffs. You’ve got to win the ones you’re supposed to. That’s why the division games mean so much. If we’d won the division games, we’d still be in the driver’s seat.”

Instead, they are headed home early.

“We are certainly disappointed we are not in the playoffs,” coach Tom Coughlin said after New York missed the postseason for the third time in four years. “Our goal was certainly to be there. Our goal was to win the division. We didn’t do that either. We won nine games and there is no way anyone can talk us out of that. We do have the nine wins, but it’s not good enough.”

A year ago it was. The Giants won their last two games in 2011 to get into the playoffs, and finished the season with six straight wins in earning their second NFL title in five seasons.

This marks the seventh straight season the Super Bowl champion has failed to win a playoff game the following year.

Moments after finishing his worst season with the Eagles (4-12), Reid said he would like to return for the final year of a contract that will pay him $6 million next year. Reid expects to meet with owner Jeffrey Lurie on Monday.

“I’ve been doing it a long time. I have respect for Jeff Lurie. I go in eyes wide open,” Reid said. “Either way, I understand. Whatever he chooses will be the right thing. He always does things for the best interests of the Eagles.”

Eli Manning did his part to keep the Giants in the chase with a career-best five touchdown passes. Fans who stuck around were chanting “Let’s Go Lions” as the final moments ticked off in the Chicago-Detroit game.

“It hurts,” said Manning, who finished 13 of 21 for 208 yards and no interceptions. “Each year you want to make the playoffs to give yourself an opportunity to win a championship; 9-7 last year was good enough. It wasn’t good enough this year and we knew it wouldn’t be.”