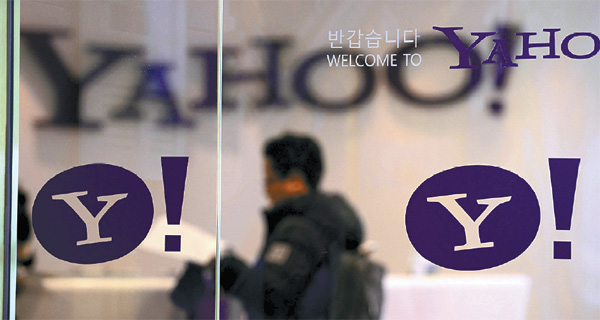 Yahoo Korea doors at its headquarters in Samseong-dong, southern Seoul, yesterday are being closed as the company is finally shutting down after 15 years in business here. The announcement was made in October.[NEWSIS]


Yahoo halted its Korean service yesterday, pulling out of one of the world’s most wired countries after 15 years.

Yahoo will halt all products, services and content of Yahoo Korea from yesterday in addition to ending customer support in Korea on the same day, the company wrote on its local Web site. In October, Yahoo announced its plan to pull out of Korea as CEO Marissa Mayer wants to focus more on stronger markets.

“The decision is part of Yahoo’s efforts to focus its resources on establishing a stronger global business,” the company said in an earlier statement.

The exit comes as the U.S. search firm is grappling to stay afloat amid the emergence of newer service providers, such as Google and Facebook, that have successfully amassed users in Web and mobile sectors.

Locally, the company has been dwarfed by homegrown portal operators such as NHN and Daum Communications that operate the country’s two most visited Web sites - Naver and Daum.

Yahoo, which once dominated the local search market, is estimated to now claim less than 1 percent of the local market. The company did not make it into the top 10 domains, whereas visitors to Naver and Daum hit 31.6 million and 28.3 million in November, according to data by KoreanClick.