Hallyu gets a mega couple in Rain, Kim Tae-hee

Hallyu gets a mega couple in Rain, Kim Tae-hee 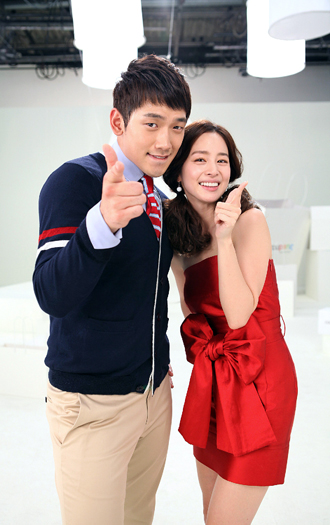 Rain, left, and Kim Tae-hee filmed a commercial for social commerce site Coupang in 2011 way before they began dating. Provided by Coupang

Responding to a media report on Tuesday that Rain and Kim are dating, Kim’s agency, Lua Entertainment, officially confirmed later that night the two top stars have been a couple for the past month.

“It is true that [Kim] is meeting [Rain],” the agency said in its release. “Currently, they are at a stage where they are getting to know each other.”

According to the agency, it’s been around one month since the 31-year-old Rain, whose real name is Jeong Ji-hun, started dating Kim, a 33-year-old actress who made her debut in 2000.

The two first encountered each other while shooting a commercial for a social commerce company in 2011. Rain and Kim became friends first, and later on something more.

“The two celebrities are very well known [to the public],” the agency said. “It is true that they don’t have enough time to meet each other and there are limited places where they can meet.

“It seems they are at a stage where they also don’t know for sure what their hearts are like toward each other,” it said.

The love story first broke on Tuesday, when an online entertainment site released a photo of Rain and Kim on a date.

The two stars were spending the Christmas season together.

It was around 12 hours later that Kim’s entertainment agency officially confirmed the two as a couple.

Rain is currently serving in the military as a corporal, while Kim is preparing to appear in a new SBS television drama starting in March.

It is her first appearance in a soap opera in some two years.

Rain will be discharged from the military on July 10.

Rain and Kim’s relationship became the most-searched item on Naver, the country’s largest search engine. News spread quickly through blogs and social networking services, with some Internet users congratulating them while others raised questions over how Rain was able to get out of the military so often to date Kim.

Internet users pointed out that Rain, who joined the military as an “entertainment soldier” on Oct. 11, 2011, was given more leave and special vacations than regular soldiers.

According to the Ministry of National Defense, of the 450 days since Rain joined the military, the celebrity was off work for 94 days, which is triple the amount a regular corporal would receive, which is around 30 days.

The Defense Ministry, meanwhile, has its own say on the issue.

“Rain has been dispatched to serve in the military’s promotion department, and unlike others, soldiers there have a lot of preparations to do to stage performances around the country,” a ministry official said. “It is natural that they need more leave from their barracks.”