Naepo City gets off to a rocky start for workers

Naepo City gets off to a rocky start for workers


On the first day of work of the New Year, public workers at the South Chungcheong Provincial Government faced their first obstacle: not enough lunches to go around.

“I was told from cafeteria workers we are short on dishes 10 minutes ago,” said a female worker in a long line. “And I am still here in the line with no dishes in sight.”

Government workers began their first day of work yesterday at the newly built government office building in Naepo City, as the South Chungcheong government has completed its relocation to the area. The city is planned to be built on land that overlaps both Hongseong and Yesan counties in South Chungcheong.

But due to a lack of basic infrastructure, such as housing and restaurants, 1,500 provincial office workers are scrambling to adjust to the undeveloped new city. 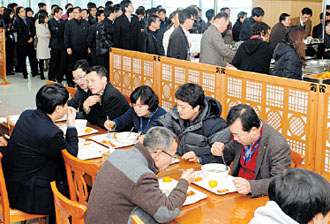 The new seven-floor provincial office building is 4 kilometers (2.5 miles) away from nearby towns with restaurants.

With icy roads and temperatures below zero degrees Celsius (32 degrees Fahrenheit) yesterday, about 1,400 workers crowded the cafeteria to receive enough dishes for 1,300 people.

Of around 1,500 provincial office and related office workers relocated to the new building, only 500 officials are found to have moved to nearby Hongseong and Yesan counties.

The number of officials who have settled in a new city with their families only stands at around 100 because of a lack of housing utilities and cultural and educational infrastructure.

By the end of next year, apartment complexes that will provide enough housing for 2,738 households will be built.

But by the end of January, only 885 families will be able to move into new apartments, far short of providing enough housing for commuting public workers.

Many government workers also have decided to wait for one or two years to see if additional utilities will be set up in Naepo before they make a settlement decision.

In efforts to offset inconveniencies facing 1,500 officials, the provincial government said it would provide 20 commuter buses to transport workers from Daejeon to Naepo for the next four months.

“I got on a commuter bus at 6:30 a.m. today and it took me an hour and a half to get here, and I am still exhausted [from the ride],” said Kim Mi-ok, who works at the audit office at the provincial government. “Unless public officials take the initiative [despite expected daily inconveniencies], it will not be an easy task to have the workers relocated here.”

Being aware of difficulties that are about to face 1,500 provincial officials, South Chungcheong Governor An Hee-jung asked them for their “leading efforts in revitalizing the new city for the people of South Chungcheong as public servants” during a kick-off meeting of the year yesterday.

Constructed as part of the balanced regional growth project with an aim to evenly distribute development throughout the country, the 9.95-million-square-meter (2,458.7-acre) new city is aiming to host a population of 100,000 by 2020.