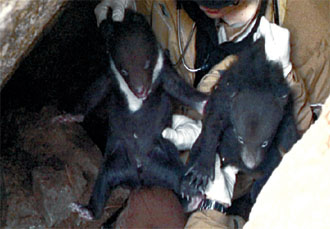 A worker holds two cubs born in January 2011 to a female Asiatic black bear from Russia and released into the wild in 2005 in Mt. Jiri in South Korea. One cub from the litter was fathered in the wild by another black bear from Russia, but the other cub’s father is believed to be a Korean-native black bear. Provided by the Korea National Park Service

Asiatic black bears native to Mount Jiri in the southern part of the Korean Peninsula were believed to be extinct at the beginning of the millennium.

But an examination of the genes of one black bear cub born in the wild on the mountain may prove otherwise, according to the Korea National Park Service, which oversees the restoration of black bears.

The Asiatic black bear restoration project was implemented by the Ministry of Environment in 2001, and since 2004, young Asiatic black bears from countries such as Russia, China and North Korea were brought in and successfully released into the wild on Mount Jiri.

Through this process, 26 black bears are believed to be living in the wild on Mount Jiri - 18 bears from abroad that were released into the wild by the park service and eight cubs that were born to these bears. That is, until now.

The Korea National Park Service, after examining the blood and fur of the Asiatic black bear cubs, stated Tuesday that one of the cubs may be fathered by a Mount Jiri-native black bear after its genes did not match any of the black bears in their database.

A female Asiatic black bear, named RF-18, brought from Russia and released into the wild in 2005, gave birth to two cubs in January last year.

One cub from the litter was fathered in the wild by her comrade bear from Russia, RF-19.

The park service stated that a female bear can mate with more than one male in a short period of time and give birth to cubs in the same litter with different fathers.

“Occasionally, you see it reported abroad where female bears mate with multiple male bears and give birth to cubs with different paternity lines,” said Yang Doo-ha, of the park service’s Species Restoration Center.

In the case of Alaskan brown bears, two out of seven females give birth to cubs in the same litter with different fathers.

The park service originally investigated if a black bear from the zoo, brought from Japan or Taiwan, might have escaped and be living in the mountains, but confirmed that was not possible.

Thus, it is likely that a Mt. Jiri-native black bear exists in the wild, the park service stated.

The last the Jiri-native black bear was spotted in 2000 through footage from an MBC (Munhwa Broadcasting Corporation) documentary and then again in 2002 on park service footage.

Asiatic black bears are first-class endangered wild animals under the Convention on International Trade in Endangered Species of Wild Fauna and Flora (Cites) and listed as vulnerable under the International Union for the Conservation of Nature and Natural Resources’ (IUCN) Red List of Threatened Animals.

Their numbers dwindled in Korea because of destruction of their national habitat during the Korean War (1950-53), hunting and poaching.