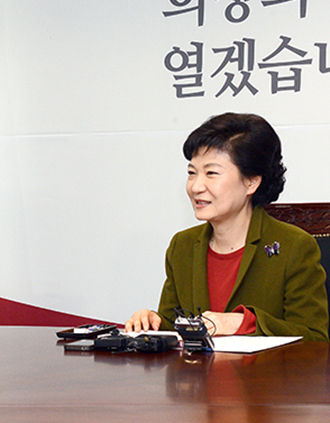 The key theme of the Park Geun-hye campaign was “grand national unity,” and expectations are high that appointments to her first cabinet and the Blue House secretariat will be free from deeply rooted regionalism.

Since the 1963 launch of the administration of Park Chung Hee, the president-elect’s father, politicians from the eastern Gyeongsang region controlled the country as presidents except for Kim Dae-jung and Choi Kyu-hah. The regional dominance led to favoritism for people from Gyeongsang for top government jobs.

In her acceptance speech on Dec. 20, Park stressed that her top priority was ending the deeply rooted regional, ideological and generational schisms of Korea.

“I will strive to end the chain of history of extreme divisions and conflicts over the past half century with reconciliatory efforts and impartial personnel appointments,” she vowed.

In past decades it was normal for ministers and vice ministers in an administration to hail from the same hometown as the president. The trend was even stronger in Blue House appointments.

The Ministry of Public Administration and Security provided to Saenuri Party lawmaker Park Seoung-hyo the records of government officials higher than vice minister since the Kim Young-sam administration. Here’s what they showed:

In the government of Kim Dae-jung, who was from Sinan, South Jeolla, 21.7 percent of 221 senior officials were from Gwangju and South Jeolla.

The trend was even stronger in Blue House secretariats, particularly the first for each president.

President-elect Park announced a transition team Friday that will choose her first cabinet and Blue House secretariat. Park was criticized last week by the opposition Democratic United Party over the selection of Lee Dong-heub, former Constitutional Court justice, as the court’s next chief justice.

Both the Blue House spokesman and Park’s spokesman made clear that President Lee and President-elect Park jointly chose the 61-year-old conservative judge to head the Constitutional Court starting in late January for the next six years.

“This nomination is actually the personnel appointment of President-elect Park,” said Representative Lee Un-ju, a spokeswoman for the DUP. “Judge Lee is from Daegu and graduated from Kyeongbuk High School [in Daegu] and Seoul National University law school. This is a typical favoritism to the Daegu-North Gyeongsang region.”

Another DUP lawmaker, Yun Kwan-seok, demanded the nomination be withdrawn. “It even broke the tradition that the heads of the administration and the judiciary have always come from different hometowns,” he said. Park is from Daegu.

Representative Park Ki-choon, the DUP’s new floor leader, vowed that the opposition party will scrutinize Lee thoroughly in the confirmation hearing. “Lee has made some rulings that ignored the people’s basic rights,” Park said in an interview with PBC. “This is not an appointment for grand national unity. This is against what the president-elect had promoted.”

It remains to be seen how Park will achieve her so-called grand national unity promise in personnel appointments for the cabinet and the Blue House. After her victory, she said talented people from all regions, genders and generations will be invited to join her government.

One of her presidential pledges was to create an Equal Opportunity Committee in her government. She made the promise last September, explaining that the committee will pay special attention to women, families with non-Korean wives, the disabled and youth.

The committee will also hold an annual survey on personnel appointments and create an index to monitor favoritism for certain hometowns or university ties in the ranks of officialdom.

Experts said Park herself will be beneficiary if she makes some progress on national unity and diversifies the kind of people surrounding her.

“If a president insists on surrounding himself or herself with close associates, he or she will only hear the same voices,” said Kim Keun-sei, professor of public administration at Sungkyunkwan University. “Then the president will fall into the groupthink trap.”

Another expert said the national unity cannot be achieved by merely appointing some Jeolla natives or liberal figures.