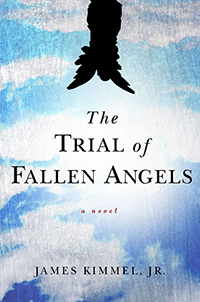 The Trial of Fallen Angels


Lawyer Brek Cutler has a husband she adores, a baby daughter and a successful, high-powered career, but suddenly she finds herself standing on a train platform, covered in blood.

It turns out she is in heaven, where she is quickly recruited to defend people’s souls in the Last Judgment - a responsibility that forces her to face her past, her own need for judgment and to ask herself how capable she is of forgiving.

James Kimmel Jr., himself a lawyer, was inspired to write his debut novel, “The Trial of Fallen Angels,” by the increasing disparity he felt between his job and his religious beliefs.

Kimmel spoke with Reuters about his inspiration for the book, his own conflicts and justice and forgiveness.

Q. What got this story going?

A. I’ve been practicing law for now over 20 years, and fairly early on in that career I began to experience a conflict between my duty to seek justice on behalf of my clients as a lawyer and my spiritual beliefs, the necessity and even the practical value of forgiveness.

So I found myself on a path of heading into the upper reaches of the legal profession. But at the same time, as a litigator, I was feeling a deepening conflict between what I was doing and my spiritual beliefs. That eventually led to a crisis that derailed that aspect of my career entirely, where I just felt the need to pull out of there. To resolve that conflict I began undertaking a study of the world’s religions to see what they all had to say about justice versus forgiveness, the idea of seeking revenge versus forgiving. I also started writing.

What I really wanted to do with this novel was explore the conflict between justice and forgiveness that I was experiencing, but to put that in the most extreme set of circumstances I could imagine - which ended up being at the trial of the final judgment, where all eternity’s at stake.

What led you to choose the structure and the people that you did?

I can’t remember with clarity exactly when casting this in the voice of a woman came to me, but my wife is a lawyer as well, though not a litigator.

I really was a bit frightened by the idea of writing an entire novel, since I was trying to resolve my own conflict with fiction, and this character would be my avatar, as it were. I eventually came to the idea that if I spoke in the first person female I would create a bit of psychological distance between myself and the character that would allow me to explore it.

You had the idea, you had the character - how did you proceed from there? You said it took a long time to write.

Yes, it took more than a decade for me to write this book. And no, I didn’t have it all outlined from the start. This is a book that, as many writers experience, somewhat took on a life of its own and began writing itself.

It was very difficult to place yourself in an environment that you’ve never been in and imagine what that environment could be like, something that’s in the afterlife and where these trials are being held, and what a soul would be experiencing in this place.

I think what really became important for me was her real need - and I thought it was a very human need - to continue to cling to and drag her life’s past into that place, to not be willing to let it go. In the end, I think that’s what justice seeking versus forgiveness is all about, because when we’re wronged by someone, and that wrong occurs perhaps today - and a month later, six months later, a year later, 10 years later, sometimes at the end of a lifetime, we’re still insisting on thinking about that, dwelling upon it, regretting it, feeling angry over it and wanting justice for it - some sort of final capitulation and inflicting of final suffering upon the person who harmed us, perhaps years ago.

When do we stop? When can we stop, and what can help us stop?

That’s what was really necessary for me in this book, to create that set of ultra-rarefied, crucible-like circumstances, where I could test justice versus forgiveness.

Do you think, with the kind of big issues you took up in this book, that there’s the danger of becoming preachy?