Dolphin, whale numbers on the rise

Dolphin, whale numbers on the rise 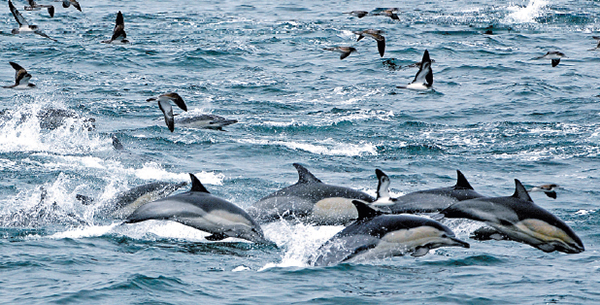 A photo by the Whale Research Institute under the National Fisheries Research and Development Institute shows a herd of common dolphins swimming in waters off Pohang, North Gyeongsang on May 22, 2012. [NEWSIS]


ULSAN - The number of dolphins living in the East Sea has risen substantially and the minke whale population in both the East Sea and Yellow Sea is also rising, a research institute has found.

The Whale Research Institute under the National Fisheries Research and Development Institute said yesterday about 52,000 common dolphins currently live in waters off Korea’s east coast during the spring and summer. The number has increased by 17,000 from 2011’s 35,000.

“The number is the largest-ever since the country began research activities on whales in 2000,” Park Gyeom-jun, 38, a researcher at the National Fisheries told the JoongAng Ilbo.

The institute said a study of the dolphin population was conducted by five researchers for 15 days in September.

The institute also found 600 minke whales in the East Sea and 1,000 in the Yellow Sea; 4,000 Pacific white-sided dolphins in the northern area of the East Sea; and about 30,000 finless porpoises in the central region of the Yellow Sea. It also concluded that a total of 114 Indo-Pacific bottlenose dolphins, an endangered species, are off Jeju Island’s coasts.

Dolphins and whales choose their habitats according to their food sources. Pacific white-sided dolphin and finless porpoises, which feed on shrimp, crab and anchovy, live off the west coast.

“The reason for the increase in common dolphins was an increase in squid, herring and mackerel in the eastern coastal areas,” Park said.

Fishermen complain that their crustacean hauls are dwindling because of whales. The average finless porpoise in the western sea is about 1.9 meters (6.2 feet) and weighs 70 kilograms (154 pounds), but it eats a lot. According to the institute, a finless porpoise eats an average of 1.2 tons of food a year and whales eat 146,000 tons of things like squid. It said they consume about 12 percent of the country’s 1.23 million-ton annual catch.

“Once a pod of whales passes though, it kills every fish,” Kim Byeong-chae, a fisherman complained. “Once they find squid, they stay there and eat until they don’t see any more.”