An old, unusual hanok gets a new life

An old, unusual hanok gets a new life

Seoul Mayor Park Won-soon will soon be living and working in a two-story hanok in Bukchon. [JoongAng Ilbo]


In more ways than one, the House of Baek In-je in Bukchon is an unconventional hanok, or traditional Korean home.

The 100-year-old house is a two-story structure. Two-story hanok are not unique but they are rare. Plus the house has a hallway that connects the anchae [women’s quarters] and sarangchae [men’s quarters], which defeats the whole idea of having separate quarters for the women and men, which was a very serious idea during some part of the Joseon Dynasty (1392-1910).

Starting September, the House of Baek In-je will be the official residence of Seoul Mayor Park Won-soon, after he declared last November he would sacrifice his current residence in Hyehwa-dong, Jongno District, which is in the way of an envisioned restoration of the Seoul Fortress. By 2015, Korea hopes to complete the fortress restoration and register it as a Unesco cultural property.

The 2,460-square-meter(2,942-square-foot) House of Baek In-je is the second largest hanok in Jongno after the 130-year-old residence of the late President Yun Po-sun in Insa-dong, Jongno District in central Seoul. The house - which is a city-designated culture property, Folklore Material of Seoul City No. 22 - has never been opened to the public. The JoongAng Ilbo, accompanied by Ahn Chang-mo, an architecture professor at Kyonggi University, got a rare look inside the building. 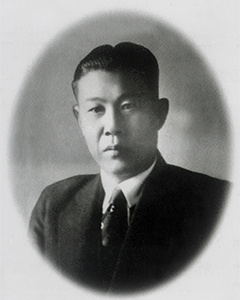 Baek In-je, who advanced Korea’s medical research, lived in the house for about 10 years from 1944.

The house is hard to miss in Bukchon between the Samcheong-dong area and Changdeok Palace. In the alley behind the Gahoedong Community Service Center is the large house. The first thing you notice when you enter its gate is the two-story structure. “Koreans began to add floors to their houses as modern culture and products were introduced in the country and the need for larger spaces and storage emerged,” Ahn, who specializes in modern architecture, said.

He said it isn’t accurate to say that just because it is a two-story structure it’s influenced by Japan.

In fact, soon after Park announced that he chose the House of Baek In-je as his new residence, some people criticized the decision as inappropriate because it was built and used by Han San-ryong, a nephew of Lee Wan-yong, one of the notorious Japanese collaborators blamed for surrendering the country’s sovereignty to the Japanese and facilitating the colonization of Korea (1910-1945).

But others shot down those arguments, pointing out that the house was lived in by Baek In-je, the medical doctor who founded Inje University Paik Hospital, and his children for about 60 years from 1944. Baek, who contributed to the advancement of Korea’s medical research, was kidnapped by North Koreans during the Korean War (1950-53). That’s how the house acquired its name.

The Seoul Metropolitan Government purchased the house in 2009 for 14 billion won ($13.2 million) with the intention of using it as the Bukchon Traditional Culture Center.

Despite all the controversy, the view from the sarangchae was undoubtedly pleasant. Sunshine came through the glass windows and the garden was well tended.

“We plan to renovate the sarangchae and use it as a reception hall for guests,” said Lee Gi-bong, head of mayor’s residence planning team. “The garden will be used for parties for guests.” The anchae, which is connected to the sarangchae by a hallway so people can shuttle to and from without having to go outside, will be renovated to be the mayor’s work and living spaces.

Beside those two main areas, there is a byeoldang, or a detached, additional structure in the backyard. As it’s located at a slight elevation, it offers a very good view of Bukchon Hanok Village.

“The byeoldang was usually where the elderly of the household would reside,” Ahn said. “Since it’s a detached and independent structure, it should have many usages for the mayor.”

Many observers agree that it’s a good thing to choose a hanok as the official residence for the Seoul mayor. “Many people who visit the mayor are foreigners, so this place can be a vehicle through which we can promote our cultural and traditions,” said Kim Young-jong, the head of the Jongno District Office, who used to be an architect himself.

Lee of the Seoul Metropolitan Government said that the main principle in the renovation is to rebuild as little as possible and “seek to retain the original form as much as possible.”

The renovation will start early this year.