Park looks to Germany for economic model on SMEs

Park looks to Germany for economic model on SMEs 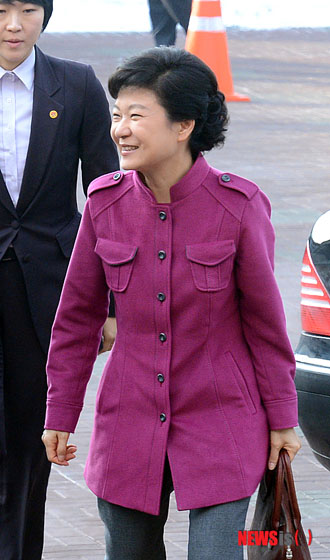 Korea’s policies on promoting so-called economic democratization, a key pledge made by President-elect Park Geun-hye throughout her campaign, will be largely focused on fostering small- and mid-size companies, following a path taken by Germany, a key official from Park’s transition team told the JoongAng Ilbo on Monday.

“President-elect Park has a strong will to realize her economic democratization pledge, and the focus of that pledge will be on reviving small- and mid-sized enterprises [SMEs],” the official said. “What the president-elect has on her mind is that if SMEs don’t revive, it will be difficult to keep her other pledges of increasing the percentage of middle-income households to 70 percent or narrowing the income disparities. She thinks that it will be difficult to prosper all together and to stabilize the livelihoods of ordinary people.”

“Her basic idea is that the economy will work out well if the country helps and supports the [economically] weak.”

During her campaign, Park has on numerous occasions stressed the importance of fostering SMEs. On Dec. 26, a week after she was elected as the country’s first female president, Park visited the Korea Federation of Small and Medium Business (Kbiz), even before she met with conglomerate heads that are part of the Federation of Korean Industries (FKI). 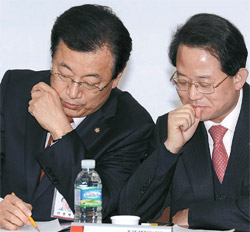 There, she told representatives of the SMBA that she would “become a president supporting SMEs.”

Also, Park sent a New Year’s message to Kbiz on Jan. 4, saying she will “divert the country’s economic structure so that it focuses on SMEs.”

Promoting economic democratization has been a key campaign pledge for Park along with rival candidates Moon Jae-in of the main opposition Democratic United Party and independent Ahn Cheol-soo, who in the last minute withdrew from the presidential race. Park made economic democratization one of her key pledges when she began her primary campaign in July, last year, and Moon and Ahn quickly followed her and embraced the catchphrase as a part of their campaigns as well.

The slogan was first introduced by Kim Chong-in, a former four-time lawmaker who served as the senior economic affairs aide in the Roh Tae-woo Blue House, who drafted the clause in the Constitution to include it during the 1987 amendment. Kim, also a long-time economic adviser to Park, has led the president-elect’s economic democratization campaign.

After studying German language at the Hankuk University of Foreign Studies, Kim obtained his master’s and doctorate degrees in economics at the University of Munster in Germany in the 1960s and 1970s.

In Park’s transition team, the second economic subcommittee will be in charge of realizing the key pledge of supporting the economically disadvantaged. Park has appointed Lee Hyun-jae, a commerce and trade expert, to lead the subcommittee.

Lee, who was elected as a lawmaker for the first time in April, has also served as the head of the SMBA from 2006 to 2008.

“Small firms are the core of job creation, and to build a strong economic structure, these firms should do well,” Lee said yesterday.

The key official from Park’s transition team also told the JoongAng Ilbo that the case of how Germany was able to develop SMEs will provide a clue to how Korea should boost the industry for SMEs.

When the European Union faced a fiscal crisis last year, Park reportedly acknowledged Germany was able to solely maintain stable economic growth thanks to the strong competitiveness its SMEs hold in the world market.

Even when Park received a congratulatory phone call from German Chancellor Angela Merkel after her election victory, Park reportedly told her counterpart that “Germany seems to continuously prosper because Chancellor Merkel was able to lead the German economy in a stable manner and cope well with the euro zone crisis.”

Insiders note that the reason Park is pointing to Germany is not only because of the influence of Kim, her long-time economic advisor who studied in the European country, but also because of how it assures freedom in companies’ activities while at the same time strictly regulates activities that dampen fair competition.

Park has also emphasized that the competitiveness of large companies should be strengthened while they should be strictly punished for any unfair activities, such as favoring family-owned businesses.

“To help SMEs in Korea, the government shouldn’t simply support them with funding but secure a market where they are able to sell products receiving the right price,” said Lee Hyun-jae, head of the second economic subcommittee under the transition team.