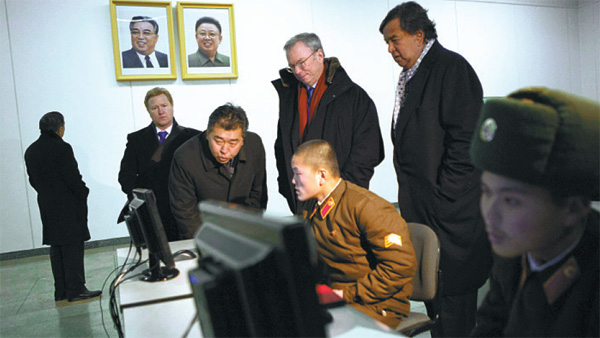 
PYONGYANG - Former New Mexico Gov. Bill Richardson said yesterday that his delegation visiting North Korea is encouraging the regime to put a moratorium on missile launches and nuclear tests and to allow more cell phones and an open Internet for its citizens.

Richardson told the Associated Press in an exclusive interview in Pyongyang that the delegation is also asking for fair and humane treatment of an American citizen detained in North Korea.

Also on the trip is Google Executive Chairman Eric Schmidt.

“`The citizens of the DPRK (North Korea) will be better off with more cell phones and an active Internet. Those are the .?.?. messages we’ve given to a variety of foreign policy officials, scientists” and government officials, Richardson said.

Most North Koreans have never logged onto the Internet, and the country’s authoritarian government strictly limits access to the World Wide Web.

Richardson has said the delegation is on a private, humanitarian trip. Schmidt, who is the highest-profile U.S. business executive to visit North Korea since leader Kim Jong-un took power a year ago, has not spoken publicly about the reasons behind his visit to North Korea.

Schmidt, who oversaw Google’s expansion into a global Internet giant, speaks frequently about the importance of providing people around the world with Internet access and technology. Google now has offices in more than 40 countries, including all three of North Korea’s neighbors: Russia, South Korea and China, another country criticized for systematic Internet censorship.

On Tuesday, students at North Korea’s elite Kim Il Sung University showed Schmidt how they use Google to look for information online. Surfing the Internet that way is the privilege of only a very few in North Korea.

Officials say students at the university have had Internet access since April 2010.

Computers at Pyongyang’s main library at the Grand People’s Study house are linked to a domestic Intranet service that allows people to read state-run media online and access materials culled by North Korean officials. North Koreans with computers at home can also sign up for the Intranet service. But access to the World Wide Web is extremely rare.