Gas leak causes 760 to be evacuated

Gas leak causes 760 to be evacuated 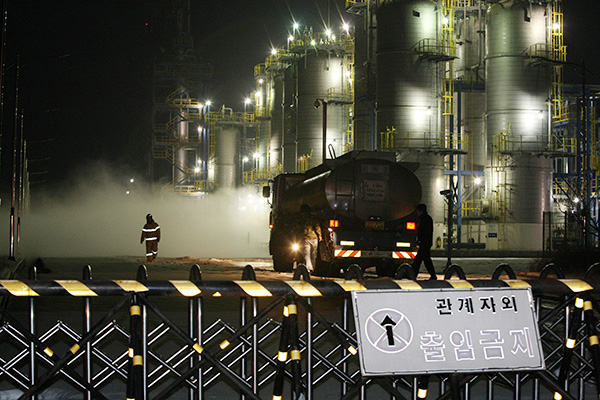 Gas from a hydrochloric acid leak billows out like smoke from a faulty valve in a tank at a polysilicon plant in Sangju, North Gyeongsang, on Saturday. Firefighters and an environmental team contained the leak. By Gong Jeong-sik


Yet another gas leak in North Gyeongsang, this time at a polysilicon plant, led to the evacuation of some 760 residents on Saturday.

The hydrochloric acid leak occurred at the Woongjin Polysilicon plant in Cheongni-myeon, Sangju, from a 250-ton tank around 8:00 a.m., but was not reported until three hours later. The plant had stopped operation for six months and was being maintained by a dozen workers, said police yesterday.

This is following a massive hydrofluoric acid leak from a chemical plant in Gumi, North Gyeongsang, over three months ago in September, which killed five and led to many more illnesses in residents from gas exposure, as well as damage to hundreds of acres of farmland and thousands of livestock.

In the aftermath, both the government and factory were criticized for its poor reactions to the gas leak at the Gumi plant caused by increased pressure within the storage tank.

Residents close to the Sangju polysilicon plant on Saturday finally discovered the leak and reported it around 11 a.m., and firefighters arrived on the scene within minutes.

A 57-year-old resident of the area, Kim Dae-ho, first reported the leak. “I was working at the farm some 500 meters [546.8 yards] away from the plant when suddenly white smoke gushed out from it, and around 11 a.m. I reported to the Sangju firefighters.

“As the wind began to blow I smelled something acrid.”

The Sangju police and firefighters warned residents of the area not to leave their homes through public broadcast thirty minutes later.

Another hour later, traffic within a 1.5 kilometer radius of the plant was restricted.

The cause of the leak, according to the police, appears to be a damaged valve in the storage tank of the hydrochloric acid, rupturing because of the cold weather.

Hydrochloric acid is an essential component to produce polysilicon, which is used for manufacturing solar panels. The amount leaked from the tank has yet to be confirmed.

The Daegu Regional Environment Office in the afternoon began inspection of the area 300-800 meters around the plant to detect hydrochloric acid in the air.

An investigation team from the National Institute of Environment Research’s Center for Chemical Management System arrived on the scene around 8 p.m.

The police and environment office stated yesterday that the plant stored 58 tons of toxic chemicals, including hydrofluoric acid.

Police are in the process of questioning Woonjin and raised concerns regarding neglecting their safety procedures and maintenance.

Hydrochloric acid is colorless and short-term inhalation exposure may cause eye, nose and respiratory tract irritation.