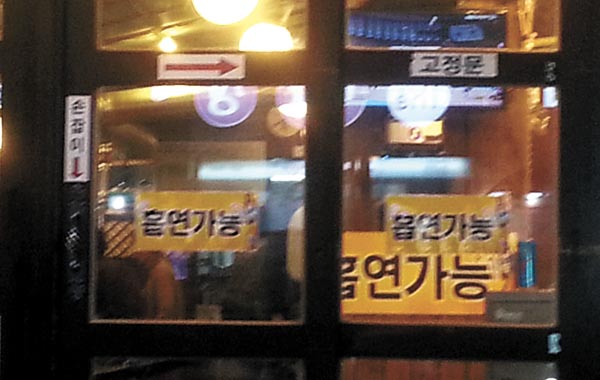 “Smoking allowed” signs are posted on the doors of a restaurant near Gangnam Station in southern Seoul on Jan. 7. By Lee Seung-ho


On Monday evening at a chicken restaurant that serves beer and soju in Gangnam, southern Seoul, a 46-year-old owner surnamed Kim was cleaning out an ashtray filled with cigarette butts.

“I never heard about that rule,” Kim said when the JoongAng Ilbo asked him about the new smoking policy in public facilities. “But I understand now why people ask me if it is OK to smoke when they come into my store.”

The new smoking policy prohibiting smoking inside public facilities larger than 150 square meters (1,615 square feet) including restaurants, bars and coffee shops went into effect on Dec. 8, with a six-month grace period. Kim’s chicken restaurant is subject to the new law, but no signs reading “no smoking” have been posted. An ashtray was provided on each table and people smoke freely while enjoying fried chicken and beer.

The JoongAng Ilbo visited 24 restaurants and bars in Gangnam, southern Seoul, Jongno, central Seoul and Silim-dong, southwestern Seoul on Monday evening. Of these, 12 of the store owners said they were unaware the new law had gone into effect.

“I didn’t know my establishment is subject to the new policy,” a manager of a bar in Sillim-dong told the JoongAng Ilbo. “I saw it on the news, but since no officials from the local district office visited my place, I thought my place is fine [for smoking].”

In early December, the bill banning smoking in about 75,000 places in the country passed a cabinet meeting and went into effect on Dec. 8.

Clubs, hostess bars and karaoke joints were exempted from the ban. Individual violators are subject to a fine of 100,000 won ($94), and shops and building owners are subject to a maximum fine of 5 million won if they allow smoking.

The law also orders shop owners to put a “no smoking” sign and details of penalties inside their facilities, but when the JoongAng Ilbo visited, only seven of the 24 places had the signs and only one restaurant posted a sign on the main gate.

Some places are running directly opposite to the policy. When the JoongAng Ilbo visited a restaurant selling pork barbeque, a sign reading “You can smoke!” was posted to attract customers.

“We put ashtrays on tables so customers can put their bones in while eating or drinking,” Shim, 48, owner of the barbeque place told the reporters after they asked him about smoking in the restaurant.

According to the Seoul Metropolitan Government, about 80 officials from local district offices are informing about 20,000 establishments of the new law in Seoul, but it doesn’t seem to be working efficiently.

“Seven officials and 24 volunteer workers from the district office are informing businesses about the smoking ban every day,” Choi Jae-gyeong, an official from the Gwanak District Office said. “When the grace period is over in May, we are considering hiring temporary workers to track down the illegal smoking.”