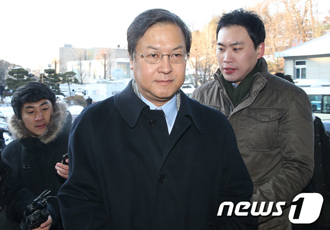 A former member of President-elect Park Geun-hye’s transition team briefly explained why he abruptly stepped down, saying it’s not related to a personal scandal.

Choi Dae-suk, a major cog in Park’s transition committee as an architect of inter-Korean policies for the next administration and also a strong candidate for the next unification minister, sent a brief e-mail to some of his friends on Sunday, when media reported he suddenly tendered his resignation, sources exclusively told the JoongAng Ilbo yesterday.

Allegedly, in an three-sentence e-mail, Choi said: “I know how much you were surprised by my sudden withdrawal. I tendered my resignation because a complicated incident occurred. It’s not about an individual scandal, so don’t worry about it.”

A spokesman for Park made the announcement on Sunday about the incoming president’s decision to accept Choi’s resignation, without elaborating why. The spokesman, Yoon Chang-jung, said it is just “a personal matter” so he can’t divulge details, although reporters were angry and complained that Park is extremely cautious about leaking information on the transition procedures.

“I guess he watched the evening news on Sunday [about his resignation] and he tried to explain it,” a close friend of Choi told the JoongAng Ilbo.

Still, Choi has not detailed the exact cause of his resignation. On Sunday and yesterday, Choi was not at his house in Cheongdam-dong, southern Seoul, where reporters were waiting for him to appear.

“There doesn’t seem to be a particular accident or concern in his family,” a relative of Choi told the JoongAng Ilbo.

Sources told the JoongAng Ilbo on Sunday that when Choi expressed his will to resign, he reportedly said, “although it’s not my direct fault,” raising speculation that he could have been forced into stepping down.