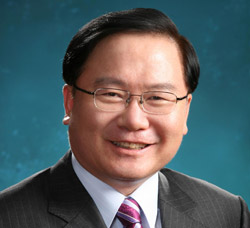 The ruling and opposition parties were on a collision course yesterday over the legislature’s confirmation of a Constitutional Court chief justice nominee.

The National Assembly will have a two-day hearing next week to confirm President Lee Myung-bak’s nomination of Lee Dong-heub as the next head of the Constitutional Court.

The 61-year-old former Constitutional Court judge was nominated earlier this month based on the consultation between the president and president-elect Park Geun-hye.

The confirmation hearings will take place on next Monday and Tuesday and the legislature will vote on a hearing report on Jan. 23.

The 13-member special committee on Lee’s confirmation hearing will be composed of seven Saenuri lawmakers, five Democrats and one Progressive Justice Party representative.

Following the nomination of the conservative judge, the largest opposition Democratic United Party vowed to vet him thoroughly. Its five lawmakers on the committee will be headed by Representative Kang Gi-jung.

“The new Constitutional Court chief justice must be a person who can meet the people’s expectations and protect the human rights of the minorities,” Kang said in a press release. “It should be a candidate who has neutral ideological and political standings. We will thoroughly check if Lee’s past behavior and rulings will meet these standards.”

DUP Representative Woo Won-shik also vowed to stop Lee’s nomination. He said the nominee was from Gyeongsang, like many other senior judges in the judiciary, and it won’t help resolve the regional imbalance. “He is also too conservative and lacks understanding on the constitutional values,” Woo said. “We received petitions from inside the Constitutional Court to stop his appointment.”

Since Lee’s nomination was announced, the DUP called him unfit based on his previous rulings.

“We expect the DUP team to focus on verifying the nominee’s expertise and qualification in the confirmation hearing, rather than wasting its energy to try to find unreasonable flaws,” said Representative Lee Hahn-koo, floor leader of the Saenuri Party.

The ruling party’s floor leader also urged the DUP to use its discretion. “The same standards will be used for the confirmation hearings of the nominees for the incoming administration’s cabinet,” Lee said.